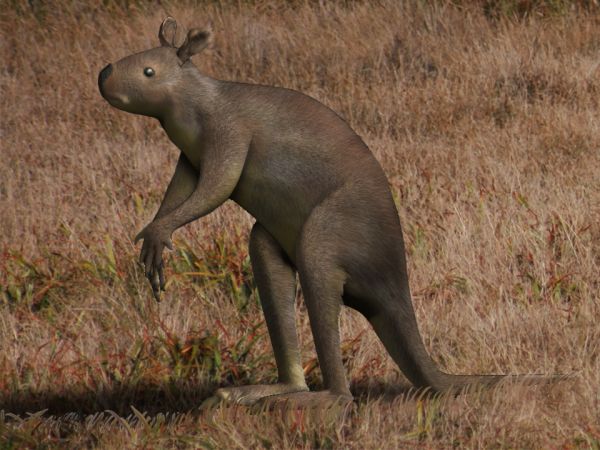 According to a new study, a giant relative of the kangaroo ambled around the Australian outback 100,000 years ago.

This creature – Sthenurines, would have been so large and heavy that it would not hace been able to hop around like its modern cousin. Instead, it is presumed that it walked upright on two feet, just like humans.

The study, titled Locomotion in Extinct Giant Kangaroos said that some of these ancient creatures grew up to 7 feet tall and weighed up to 550 pounds, making them poor hoppers.

“I don’t think that they would have gotten that large unless they were walking,” said Christine Janis, the lead researcher and a professor of ecology and evolutionary biology.

Based on the study’s findings and a biochemical analysis of the bones of these extinct animals, as well as modern kangaroos, many scientists have concluded that walking upright would be the only feasible option of transportation for this giant marsupial.

“If it is not possible in terms of biomechanics to hop at very slow speeds, particularly if you are a big animal, and you cannot easily do pentapedal (four limbs and tail) locomotion, then what do you have left?” Janis said in the statement. “You’ve got to move somehow.”

The study also showed that everything from their ankles to their bigger hip and knee joints, as well as the peculiar shape of the pelvis points towards the idea that sthenurines were made for walking.

It is unknown whether their reliance on walking would have hindered their ability to evolve and contributed to their demise 30,000 years ago.

Janis concluded that sthenurines may have struggled to escape human hunters, or may not have been able to migrate far enough to find food as the Australian climate became more arid.