On June 11th 2013, Jarren Benton emerged from his grandma’s basement siphoning the flare of Eminem, the smooth seductive tone change of Big L and the lyrical mischief of Jedi Mind Tricks. Benton’s variations of jarring lyrics and shocking imagery express graphic and vivid content that are most pertinent to a shock and awe campaign employed by military powers. When this in your face tactic works, the imagery created through word is captivating. For Jarren Benton, his album delights in using this theme with his album My Grandma’s Basement. 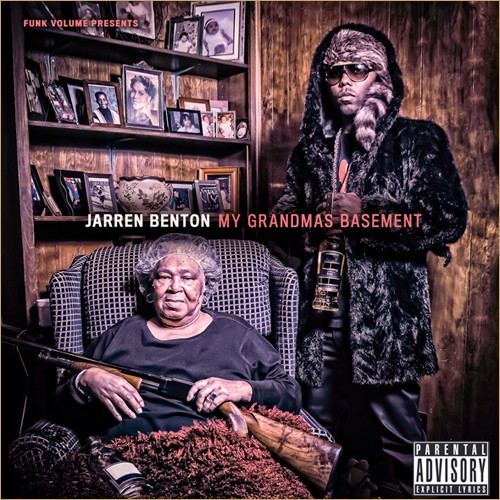 A member of the Funk Volume record label, Benton’s aggressive; in-your-face style is well suited to the unpredictable with his threats of sodomy and other assorted acts of violence on “Razor Blades & Steak Knives.” Lyrics such as “hit a girl with a bowl of grits / Then shove her fuckin’ face in a bowl of shit / So inappropriate / I’m that creepy custodian / I’ll stick a mop up your ass without no petroleum…” are both repulsive and liberating in their blunt trauma they induce on you ear drums.

On the track “Cadillacs & Chevys” Benton strikes a unique style and sound that is comparable to Eminem albeit from a different cultural reflection. Benton has an extraordinarily nimble flow and sense of rhythm that shines through with tracks such as “Life in the Jungle,” “Dreams,” and “Go Off”. These tracks display Benton as speaking directly to the listener and are refreshing, especially considering these tracks
are vulgar. This individuality is also the flaw as Benton’s utter vulgarity with the liberal use of the word “faggot” and violent language are prophesised to upset some listeners. Benton’s track “Heart Attack” is eerily similar to Eminem’s “Kim,” where the protagonist ends up murdering an ex-lover; his track is a graphic noire. This originality is what can both sell the record as a masterpiece and imply an often risky content.

Jarren Benton’s array of flows is impressive, but heavy leaning on rhymes that are often at certain times more for shock value than perhaps creativity. However it is perhaps the creativity that through the darker motives are ignite flares of artistic ingenuity. Benton is perhaps truly crazy with his occasional touches of humour always capturing the ever attentive ear of the listener and thus keeping them interested. Benton’s ‘My Grandma’s Basement’ is almost as crazy as the direction of this review, only brought on by the head spinning character of this album.

In frantic and sporadic bursts, Benton taunts like a school bully: “‘Do you have anything to say that’s sort of positive?’ Yup: suck a dick, suck a dick, suck a dick, and by the way, suck a dick.” Later, in “My Adidas” Benton, by referencing 2Pac’s bleakest album at the chorus, tries to convey what happens when major labels profit off of, and blindly perpetuate ridiculous gang imagery. Any and all comparisons to Tyler, the Creator and his shock value tactics and deliveries are null and void as Benton snaps off shocking narratives almost uncontrollably leaving no topic safe. Benton is indeed crazy, locked in a basement would do that.