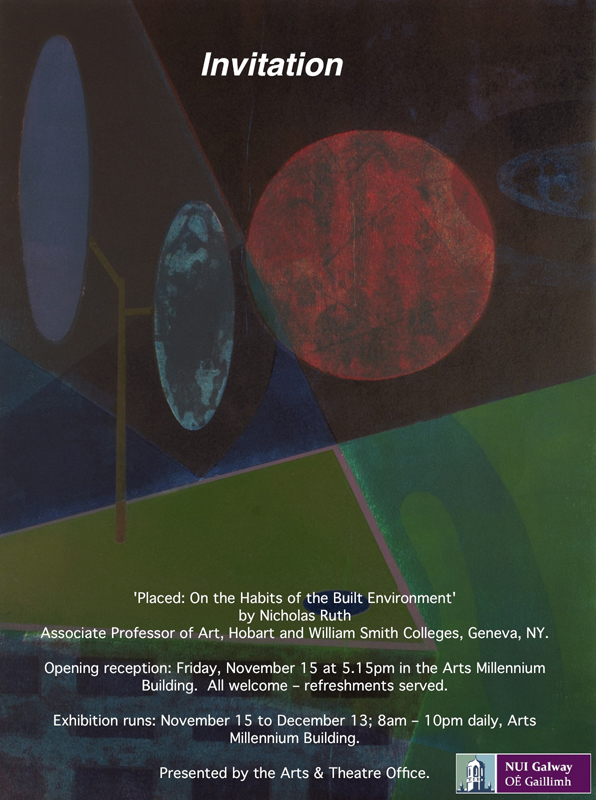 Two art exhibitions open on campus within the next week – a welcome respite for eyes buried in books or strained after too many hours hunched over a laptop.

On Friday 15 November the ArtsMillenniumBuilding will host the opening of Placed: On the Habits of the Built Environment, which is the work of United States-based Professor Nicholas Ruth.

Friday 22 November sees the launch of Taking Note or the Curious Eye, which is being curated by Robin Jones. This exhibition will take place at the art gallery.

Nicholas Ruth has said that he looks at “the anxious and funny ways in which we litter our lives with artifacts of desires, and become the victims of the solutions we make. […] As I make my pictures, it turns out that the cartoony landscape that emerges feels a little bereft. Rich radiant color and assertive forms made of tilted planes express the tension of an off-kilter yet beautiful world.”

Robin Jones is a lecturer at GTI and has taught Life Drawing at NUI Galway. A member of Artspace, Galway, he says that he wishes “to assemble an exhibition exploring the idea of the note, the notebook and the idea of noticing.”

To that end, he has brought together works by – among others – Joe Fyfe, Will Self, Paul Doran, Karin Ruggaber and Sylvia Bachli.

Both drawing and writing, Jones states, are “forms of contact with the world and the observations gathered through these media foster an attention to and an attending to, this moment of contact.”

Digital information, sketchbooks, notes books and even “the back of a fag-packet” are also ways in which we record how we “note” our world.

Placed: on the Habits of the Built Environment can be viewed in the public space of the ArtsMillenniumBuilding, until 13 December.

Taking Note or the Curious Eye runs at the University art gallery in the Quadrangle from 10 November to 20 December, Tuesday to Saturday, from 12pm-4pm.