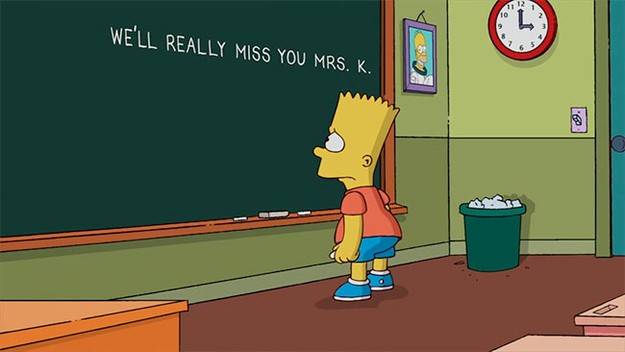 It is a strong blow for all devoted Simpsons fans to discover Marcia Wallace has sadly passed away after a long, fulfilling and successful career. Wallace had been suffering from breast cancer during the last period of her life. However, this is not what took the Springfield star. After a harsh case of pneumonia, she died on 26 October. The 70 year old comedic actress was best known for her role as Edna Krabappel in the family favourite show The Simpsons. She appeared in over 100 episodes and won an Emmy award for her role as Edna in 1992.

Some 20 years later, The Simpsons still appear daily on RTE2, Channel 4 and Sky 1 at 6pm where fans can still enjoy her glory days.Beginning her career, Marcia played the role of the receptionist in a 1970’s hit series, The Bob Newahart Show. The show involved the professional and personal misadventures of a psychologist and his family, patients, friends and colleagues and was huge from 1972-1978.

We remember Enda as Bart’s 4th grade school teacher with a little too much emphasis on the chemistry department. The character also had an unhealthy relationship with alcohol and a heavy smoking addiction. She struggled endlessly in search of love and settled for quite some time with principle Skinner. Her undeniable sexuality and obvious promiscuity was always an issue. Some fans may recall her risqué attire in the “Flaming Moes” episode. Another episode in which the children are watching a sex-ed film, she says to the children in disgust, “She’s faking it”.

In Flashback episodes we see Enda as an admirable school teacher eager to mould young minds and help troubled children. This changed the day she met Bart Simpson and she frequently blames him for destroying her love of teaching.

A touching tribute was made to her with two episodes of the show which were broadcast the Sunday following her death. The first re-aired a classic episode, “Bart the lover” where Springfield singleton Enda attempted to date Ned Flanders. This comical episode disposing the harsh and lonely love life of Edna Krabappel won Marcia an Emmy award. The second episode aired was a new one named “Four Regrettings and a Funeral”. The classic chalkboard charade, by Bart in the opening scenes read “We’ll really miss you Mrs K”.

In respect of Marcia it has been alleged that producers will not replace Edna’s character on the show.