Following a very interesting social experiment, James Falconer discusses obedience and why so many of us are obsessed with it… 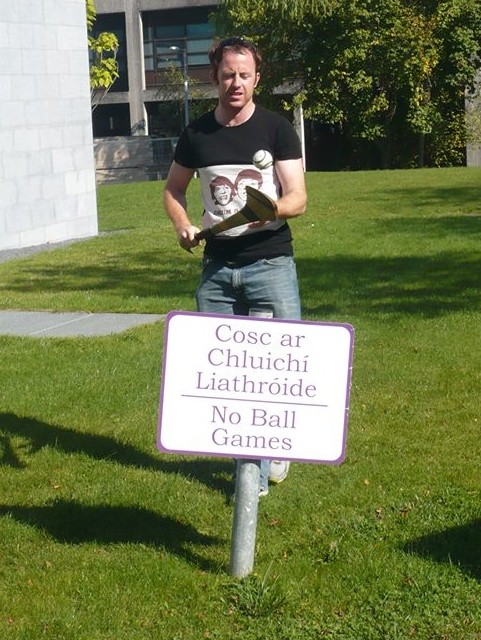 When we hear the word ‘obedience’, what do we think? Essentially, it is compliance with an order, request, law, or submission to someone’s authority. An example would be when we were young and were taught to obey our parents, schoolteachers etc. Like language, many of these traits last into adulthood and the obedient child becomes an obedient adult.

Recently, a friend and I played hurling on a patch of grass at the rear of the Nursing library, in front of Arás na Gaelige. It was a fine sunny afternoon and many people were going about their educational pursuits. There are two signs which clearly state: ‘Cosc Ar Chluichí Liathroíde, No Ball Games’.

Failing to resist temptation, we began pucking [that’s ‘hitting’ for those unfamiliar with hurling terminology] the ball over and back to one another. I was conscious of people staring at us while we manoeuvred our carefully crafted sticks to control the fast moving sliotar (ball). Hurling is one of the most skilful games on the planet. Indeed, we were providing great entertainment for the passers-by.

Facilities manager Dean Pearce from the Buildings Office said that “the signage was requested by library staff in response to numerous complaints from students studying in the Nursing library disturbed by ball games, loud music, screaming and shouting from the green outside.”

Where are the signs that read ‘no loud music, no screaming, and no shouting’? Do ‘balls games’ naturally lead to these other occurrences? Surely students can be responsible and conscientiousness enough to refrain from acting in an inappropriate fashion so close to an obvious place of study.

However, quietly pucking a ball over and back at a short distance is an eloquent and poetic art. If disturbed, what is stopping someone from confronting the source of the noise and asking them to keep it down? Isn’t this one of the most essential skills of a nurse, the ability to reason with people?

Do we really need signs everywhere telling us what to do and what not to do? Queue here. Wait here. Pay here. No smoking. No dogs allowed. Don’t feed the birds. No loitering. Keep off the grass. No ball games. These are some of the signs we often see in public places; we unconsciously obey them, but are our freedoms slowly being taken from us?

‘No loitering’ means that you are not allowed to do “nothing”!

What was really interesting about our social experiment was the reaction of some passers-by. Many people stopped and looked in what seemed like astonishment. A few minutes into our illegal puck around a lady exited Arás na Gaelige and upon seeing us declared “No ball games allowed”.

Of course, wise men say nothing, and we continued our dexterous exhibition of the ancient game. When Michael [my accomplice] over exerted himself and hit the ball over my head onto the path behind, I heard an exclamation upon my retrieval, this time from a group of young male students, “Sure, there’s no balls game there”. I don’t think they quite got the statement we were making! Why do we obey?

As long as we lack self-confidence we are unlikely to do anything other than obey, cooperate with, and submit to our rulers. Obedience is a form of social influence where an individual acts in response to a direct order from another individual, who is usually an authority figure.

We inferred that because some form of authority put ‘No Balls Games’ there we should not have acted in this way. Obedience has long been a practice of humanity, and has become a habit.

Many believe that the habit of obedience is the essential reason for continued obedience. Scottish Enlightenment philosopher David Hume believed that once accustomed to obedience, “men never think of departing from the path in which they and their ancestors have constantly trod, and to which they are confined by so many urgent and visible motives.”

Never say never, David; there are those who disobey the abuses of the Irish elite/state and the threat of violence against the disobedient subject is never far away. This coercive power operates on people simply through their fears.

How many times have we seen violence from the state against peaceful protests in Ireland? One only has to look at the situation that arose in Rossport with the Shell to Sea campaign. As Oscar Wilde pointed out; “Disobedience, in the eyes of anyone who has read history, is man’s original virtue. It is through disobedience that progress has been made, through disobedience and through rebellion.”

Should we continue to obey?

No, we should not accept €70 billion worth of private debt that is not ours? Are we going to obey this catastrophic swindle? We cannot trust promises made by politicians who are led down the garden path by the Troika. Yes, even our leaders are led, and lack the ability to disobey.

These payments are not to the benefit of anyone in Ireland, they are to maintain the solvency of the European banking system – we are the slaves of Europe. These bondholders are unsecured and can be burned. The people in Ireland have no relation to this private debt. However, our government uses the obedience and cooperation of part of our society to rule the whole. The ruling minority is united and can act in harmony; conversely, the ruled majority is unorganised and divided.

Isn’t it time to organise, unite and disobey? Please spare a thought for the still studying nurses; however, there’s a lot to be said for grass root movements. Do not obey.