Jeremy Irons visited NUI Galway in September to open the 167th year of Lit and Deb Soc. James Falconer offers his opinions of the debate… 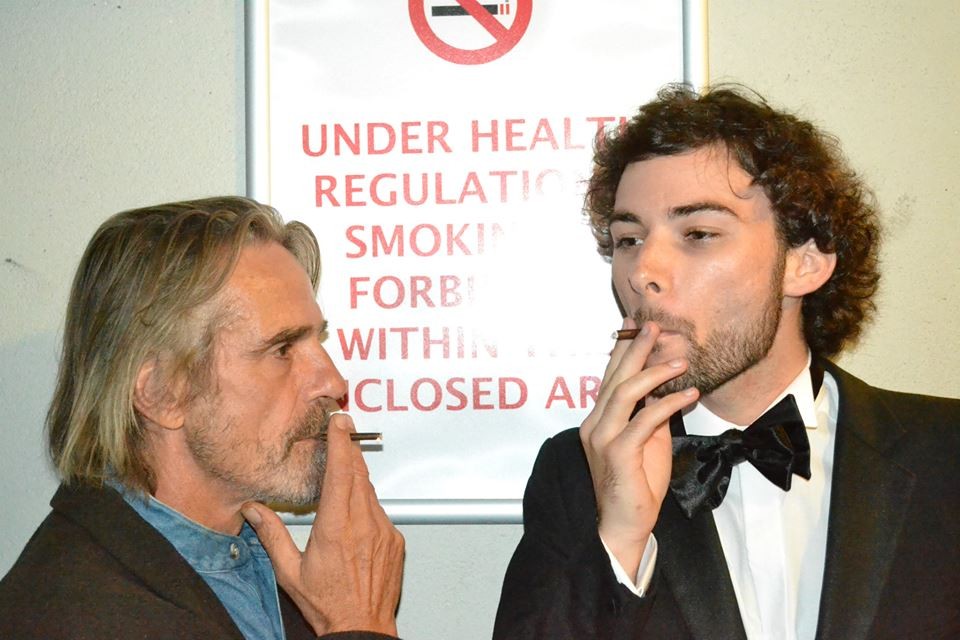 The opening night of the university’s 167th year of the Literary and Debating Society welcomed Jeremy Irons and Rob Heyland. The topic: ‘the responsibility of the privileged to be involved in public discourse and to help shape society.’

After the few introductory pleasantries by the auditor and his colleague, both clad in their fine Victorian garb, Jeremy Irons was invited to the podium.

Remember the title of the debate, ‘the responsibility of the privileged…’ One would have to admire Mr Iron’s honesty when he said that he didn’t have a lot to say politically and came along “to act as bait” for his friend, Rob Heyland.

Oh the irony – did the self-confessed privileged star of the debate – the reason so many people turned up – abscond from his ‘responsibility’ in fear of people tweeting his opinions? Yes, he did, this was a concern which Mr Irons categorically stated. Where is the authenticity? It vanished in his fear of creating a stir on social media.

Jeremy spoke about his early life, career, and donations to charities. When he opened it up to questions from the floor, people asked him fairly trivial questions about his career as an actor. One student proudly confessed to signing up for the Disney Society at Socs Day two days previous, referring to Iron’s voice of Scar in The Lion King.

It was becoming a bit of a fairy tale at this point. The first half of the “debate” ended up being a ‘Jeremy Irons, This is your Life.’ This was the result of two dominant factors: 1) he didn’t serve up much for debate 2) the audience appeared more in awe of his celebrity than concerned with the grave ills of neo-liberalism and €70 billion worth of austerity.

Rob Heyland began his address with a gripping allegory of a person (you) being in a bus going round sharp corners, looking down over a precipice. The bus isn’t slowing down. Then it goes over the edge and you’re falling into the abyss wondering why you never said anything.

Rob proposed to implement an initiative in an Irish university which would engage various departments in designing a new way of conducting society and becoming a more self-sufficient nation. He spoke about the very damaging results of casino capitalism and how US investment bank Goldman Sachs is running riot in the financial world.

He was clearly trying to invoke a sense of responsibility from the audience – was he speaking to the right people? Are students in Ireland so privileged these days? If you consider the continuous hikes in fees, cuts in grants, and terrible jobs opportunities, resulting in the continued tsunami of emigration, the people who appear most privileged are those who are responsible for the chaotic situation in which we’ve been left.

These are the cartel of bankers, investors, speculators, and politicians etc. who have not felt any repercussions for their actions; moreover, they’ve been rewarded with huge pay-offs and pensions. They are some of the most privileged, but there was no anger directed at these people? I think a more interesting debate would be: ‘how actively engaged are we as citizens of a republic: what is a republic?’

Tragically, the first person to speak from the audience remarked “Didn’t they try Socialism in the Soviet Union and it failed?” No, the Communist Party never succeeded in implementing socialism which, incidentally, is not a political system; it’s a way of distributing goods and services.

Moreover, as this person seems to have swallowed the Western propaganda that socialism is evil, one might wonder if he’s aware that the newly founded “Republic” of Ireland allowed the Catholic Church to incarcerate without trial a higher proportion of its citizens than the Soviet Union did, but don’t worry, our “republic” came wrapped in a green flag!

Socialism in Ireland is for the rich only. One of the state’s many dark secrets is that founding father, James Connolly, was a Marxist Socialist Republican, and his vision of a socialist society was one of total democracy.

On the eve of the 1916 rising he warned the Citizen Army that “in the event of victory, hold on to your rifles, as those with whom we are fighting may stop before our goal is reached. We are out for economic liberty as well as political liberty.”

Connolly’s socialism was written out of Irish history by Fianna Fáil/Catholic Church, who portrays him as Connolly the nationalist hero – wrong.

Those suffering the hardest from unlawful austerity are the most vulnerable in society. Moreover, the gap between the lowest and highest earners has widened significantly. Rob’s innovative idea was met with a wary conservatism, which also persists throughout Irish academia. Sadly, there seems to be more fervour to see a film star than to create a fairer, more equal society; needless to say, the debate was seriously lacking.