A referendum will be held this week to decide whether or not the Seanad should be abolished. Sin’s Marcus Mac Dhonnagáin and Eoin Molloy debate whether we should vote yes or no… 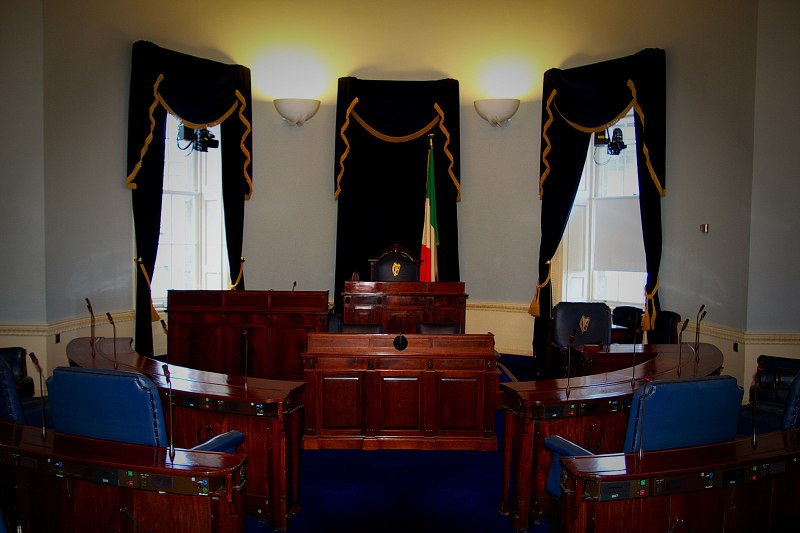 Yes: Tearing it down brick by brick

Have you ever had a dream? I know I have. I sometimes dream about an Ireland whose political woes are gone, and that we live in a utopic society where the Seanad serves a practical purpose.

But that’s all it is – a dream – and that’s what the anti-abolition argument rests on. They argue that a no vote will lead to its reform – they argue that the Seanad does serve a real purpose; safeguarding our democracy from the boisterous Dáil. It is time to wake up.

The Yes side recognises the Seanad for what it is; an unnecessary, undemocratic institute that has contributed little to our democracy. The No side either believes it is crucial to how our political system currently operates, or they see its flaws, yet believe that it can be changed – despite the long history of Irish political parties side-lining and subverting any significant reforms.

I agree that our Dáil needs oversight. In theory, the Seanad should provide this, serving as a means to keep power in check. In an ideal world the upper house would ensure that there would be no abuse of the democratic process, and it would protect the people from potentially harmful legislation. This would be the ideal, but the reality is much different.

The Seanad does not provide any real oversight of the Dáil. It most certainly does provide extra debate on bills being passed, and does at times propose certain amendments. There are certainly some cases where it has served its function over the years, but by no means has it ever been substantial. Not only those, debates on legislation, or political issues are covered by the media; arguably providing a more substantiated public discussion than the Seanad does.

Consider this; have successive Irish governments have ever had cause to fear the Seanad? No. The Taoiseach does not fear the Seanad; why should he? He’s able to nominate 11 of the candidates himself, ensuring that the government always has a means to control it.

The public has a miniscule role in voting for Senators. This has served to turn it into a system of training potential candidates that wish to run for the Dáil, or providing a retiring home for those that wish to stay active in politics, but have little influence on causing actual change.

The argument being provided is that the Seanad must be kept in order to retain a pillar of our democracy, yet the Senators that operate within it are not directly elected, and thus do not represent the actual views of the people of Ireland. This in fact raises the question of who these Senators are, and what kind of agenda they’ve been propagating without fear of being held accountable by the Irish public?

This comes back to the heart of the issue; reform. This would be an agreeable position if not for the fact that history has shown that numerous Irish governments have paid little heed to instituting any real substantial changes to our system of governance. And it will continue to remain this way if we vote No.

There are rumblings of high voter apathy towards the issue in general. This is proven by the fact that more attention is being focused on this coming budget, and what impact it will have on the local and European elections. This inspires little confidence that a No vote will lead to an outcry for reform.

The manner in which we can progress forward is by allowing the Dáil to become a more democratic, and transparent institution. Fine Gael and Labour’s proposals of changing the manner in which bills would be proposed seems sound.

Empowering committees comprised of different community groups and opposition TDs to rigorously assess legislation seems like a far more efficient process, as opposed to the undemocratic system we currently have in place

Why does a country the size of ours require two political houses – especially when one of those chambers isn’t even directly elected?

Voting Yes will do away with it, and proposed changes to the Dáil will compensate for its loss. Voting No will change nothing, and will keep our political system the same way it has always operated.

The idea that a No vote will lead to its reform is a sham. The idea that the Seanad is a necessary institution is an idealistic dream.

And it is time to wake up.

No: Government prepares for extension of Dáil bar into Leinster House once pesky Seanad is gone

On 4 October, the people of Ireland will go to poll to decide whether or not the Seanad should be abolished. Should the coalition achieve the Yes vote it is fervently campaigning for, the articles in the Constitution relating to the Seanad will be removed and all articles relating to the Houses of the Oireachtas will be replaced by a reference to Dáil Eireann.

The idea to abolish the Seanad was first propagated as part of Fine Gael’s Election Manifesto of 2011.

Fine Gael is campaigning with the slogan of ‘Save Money, Fewer Politicians.’ Now while this is undeniably not intended to be self-deprecation, it certainly comes off as such. However, the argument of saving money is hard to tangle with. As a cash-strapped nation, shouldn’t we be trying to save as much money as we possibly can?

In real terms, the cost of the Seanad to the taxpayer is quite low. It costs less than €20m to run annually. When you consider that our external debt is averaging out at $512,000 per capita, this is really a drop in the ocean – maybe even half a drop.

There doesn’t seem to be much point in abolishing a functioning institution of our government that in actuality runs up such a modest cost in comparison to the money that was shovelled into toxic banks (I’m looking at you, Anglo).

Aside from money, there are other genuine arguments for retention. Five out of every six European citizens are governed under a bicameral system, ie: two houses of government. The Seanad has been in place since its inception in the 1922 Constitution of the Irish Free State, apart from a one year period of abolition in 1936 when it was dissolved by de Valera for disagreeing with his proposed Constitutional reforms.

Should this referendum be accepted blindly, we would be left only with the Dáil – a house that has proven itself time and time again to be incredibly flawed. From expenses corruption to the Tom Barry incident, the Dáil has never been a stranger to scandal.

Our TDs seem to spend more time debating what kind of drink to get in the Dáil bar than they do our legislation. There is simply no reason to entrust sole, exclusive and un-scrutinised legislative power on such a drastically defective enterprise.

It has to be said that the Dáil has become a mere passenger to the executive. Free-thinking is not permitted. As per the abortion debate and subsequent Fine Gael schism, politicians must follow the party line or face expulsion. Therefore a TD cannot condemn an unjust bill for fear of losing his livelihood. This has caused our parliament to become filled with self-serving, careerist politicians who do not represent the wishes of the people.

The 1937 Constitution envisioned an Executive that was responsible to the Dáil. However, provisions were not created for the government to be properly held to account. This impotence can clearly be seen in the fact that the Dáil review committees are appointed by the government of the day.

To that effect, the government effectively controls the mechanism that is designed to be a check on its own power. It has also become common practice for governments to answer parliamentary questions with a combination of secrecy and obfuscation, the kind of ‘politician’s answer’ that is no real answer at all.

While I don’t advocate the abolition of the Seanad, I certainly don’t advocate retaining it in its current form. As of now our upper house functions is somewhat of a graveyard for lost and unwanted politicians. If the current coalition were committed to anything other than shameless austerity, this referendum would be about reform of the Seanad and the Dáil.

As things stand, Ireland’s politician to citizen ratio is three times higher than the European average. That has to change, but it can be done without granting unchecked power to an irresponsible house of government.

Drastically cutting numbers in the Dáil would significantly stem the drain on the exchequer without hindering productivity. I mean, how many times have you tuned in to a Dáil debate and noticed the shocking level of absenteeism?

In an idealistic world, the Seanad would be democratically elected and would be given full powers of inquiry akin to that of the American Senate. It would be granted a more potent brand of veto and given the power to enforce binding changes to legislation should a two-thirds majority vote be reached. It could even be granted the power to initiate legislation, together with a citizen’s petition signed by 75,000 registered voters, as envisioned in the 1922 Constitution.

I would suggest that if Enda, Eamonn, Bruton and Co. were so intent on scraping together an extra 20 million for unsecured bondholders, they should simply abolish pension and expenses schemes for both houses, as well as lowering politicians salaries and imposing term limits.

What will you be voting? Comment below with your opinions on Seanad Eireann.