It’s a proud time for NUI Galway as one of it’s former students has caught the attention of none other than Andrew Lloyd Webber. Órla Ryan reports… 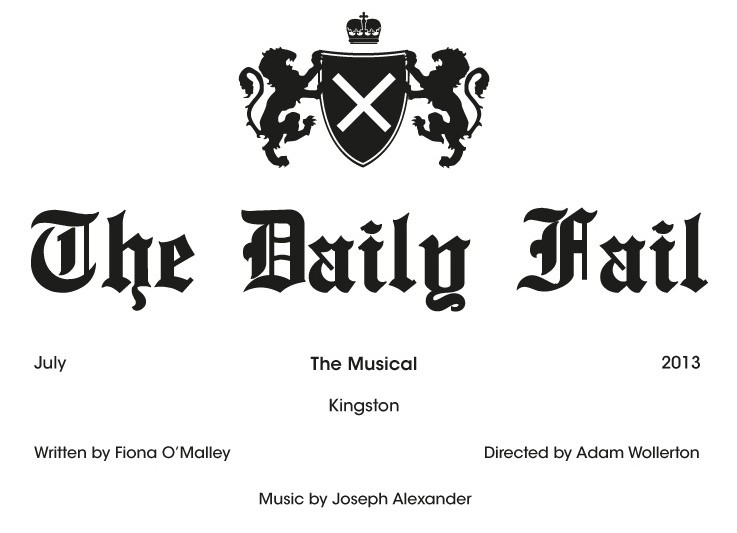 A musical written by a former NUI Galway student has caught the attention of Andrew Lloyd Webber.

Fiona O’Malley, who now lives and works in London, was inspired to write The Daily Fail: The Musical! following the phone hacking scandal in the UK and subsequent Leveson Inquiry into press standards.

The play follows two girls – London and Dim – who are desperate to become celebrities, but discover fame is not all it’s cracked up to be when their Fairy Godmother, aka Rupert Murdoch, grants their wish.

Although the play examines how the press “can destroy a person”, Fiona drew on her own experiences as a journalist – she has worked for The Sunday Times, The Guardian and The Irish Times among others and writes the style column in The Connacht Sentinel – to show both sides of the argument.

Fiona, who was raised in Tullamore, admits she “can’t stand” when newspapers lie, adding “I think tabloids stupefy people – they control the masses and it’s dangerous.”

The musical was written from October – December 2012 and will feature 19 songs over two and a half hours. It will be produced by the Untold Theatre Company – a group co-founded by Fiona and the show’s director Adam Wollerton just four months ago.

Despite this, more funding is necessary and the production team have launched a crowd-funding campaign online. Their goal is to raise £2,000 before May 11 – so far this figure stands at just over £1,400. There is one catch, however – if the financial target is not met, none of the money can be used.

Fiona is encouraging people to give whatever they can to support the project as even £1 can make a “huge difference”.  In return, donators will receive prizes including posters, tickets to the musical and a chance to meet the cast and crew – who are not being paid.

The rehearsals began in late January and are “going really well”.

The production team were a bit worried about including a Rupert Murdoch character, but Fiona says they received clearance from lawyers at their mentor group, Creative Youth. In any case, she thinks “a lot worse has been said about him”.

The musical also features ‘Hugh Grant’ and the producers have been in touch with actor’s agents, who said they liked the idea.

The team have also received positive feedback from Hacked Off, a campaign calling for a public inquiry into phone hacking scandal. Fiona hopes representatives of the initiative will attend one of the shows.

The musical will appear at The International Youth Arts Festival in London from July 25-28. If enough money is raised by the producers, the plan is to bring the musical to a number of theatres – with the eventual goal being a West End stage in 2014/15.

Although it only took her two months complete, Fiona says that’s the longest she’s ever spent writing a play. She is a prolific writer and hopes to self-publish a novel What Would Kate Do? later this year. The book centres on “a walking disaster” Bridget Jones-style character who is obsessed with Kate Middleton.

Fiona, who is currently completing a Journalism MA at Kingston University, wants to bring a Galway-based black comedy, Goodbye Mrs Robinson to the Druid theatre in the future. She would also love to open a branch of the Untold Theatre Company in the city to “source, nurture and develop new talent”.

“There’s so much talent in Ireland . . . but they don’t have a platform to show their work,” Fiona adds.

For more information on the musical or to help support the fundraising project, visit www.kickstarter.com and search The Daily Fail: The Musical!