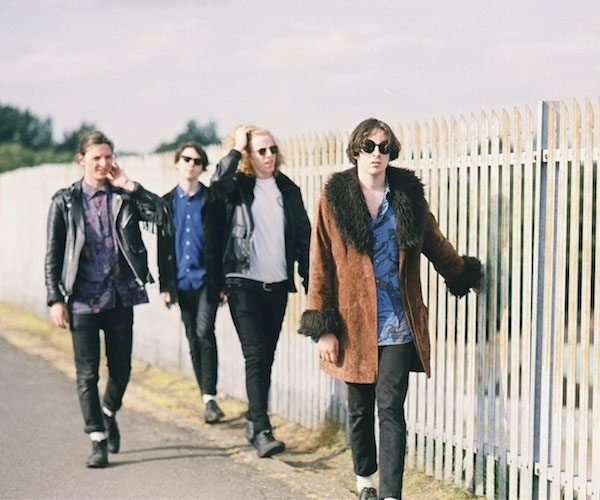 With the music industry supposedly strapped for cash in the modern downloading era, we were led to believe that the days of rock star largesse were over. Clearly, no one told Birmingham band Peace.

When in negotiations with major label Columbia, they demanded, and received, an enormous billboard in their hometown complete with their faces and the slogan “WHAT THE FCK BIRMINGHAM?”, and no other information whatsoever. As they were willing to put up with this, Columbia must be expecting a hell of an album from the band, and that brings us nicely to debut effort In Love.

The first thing that strikes you about In Love is how immediate a lot of the songs are. ‘Higher Than The Sun’ and ‘Delicious’ in particular have simple enormous choruses that will lodge themselves in your head, even after one listen. Both could be massive hits, and you would imagine at least one will emerge as a single.

‘Follow Baby’ is just as good, full of swirling guitars and ragged vocals. To be honest, there isn’t a bad song on here. ‘Wraith’, with its slightly shuffly piano riff, gives the impression that they definitely have some Happy Mondays in their record collections. Toxic sticks to the classic grunge quiet-loud-quiet-loud song structure, before erupting into a chorus of “All I wanna do, all I wanna do is forget you”.

Occasionally their influences are a little too obvious; ‘Lovesick’ borrows heavily from ‘Friday I’m in Love’ by the Cure. It’s still a tremendous song, but it could do with a bit more originality. Closer ‘California Daze’, the only survivor from last year’s Delicious EP, is a great song to end on, as Harry Koisser’s wistful vocal builds up around a gentle strum, before the guitars slowly start to grow into a final chorus.

One thing that is clear is that the song writing here is impeccable. Sometimes they lose something in the production, and the finished product isn’t quite as good as the songs deserve, but Peace excel at writing catchy and melodic tunes, and that is an attribute that will surely ensure a bright future for the band.

This is a fantastic album for anyone interested in the late 80s/early 90s output of bands like the Stone Roses or the Pixies, modern bands like Foals or just good guitar music in general. In Love is out now.