The Galway Arts Festival is looking like it will be the highlight of the Summer. James Falconer updates us on one of the fantastic acts in the line-up… 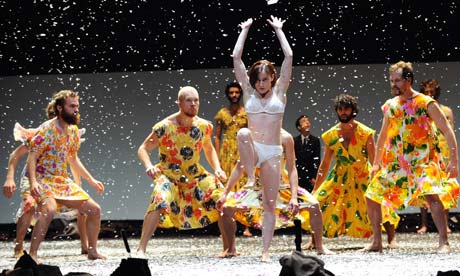 Igor Fyodorovich Stravinsky was a Russian, and later French and American composer, pianist and conductor. He is widely considered to be one of the most important and influential composers of the 20th century.

His The Rite of Spring was an extremely controversial ballet back in the early 20th century. Nowadays it’s lauded as a classic, and will be staged at this year’s Galway Arts Festival.

Almost no musical work has had such a powerful influence or evoked as much controversy as Stravinsky’s ballet. The premiere in May 1913, at the Théatre des Champs-Elysées in Paris, was scandalous. In addition to the outrageous costumes, unusual choreography and bizarre story of Pagan sacrifice, Stravinsky’s musical innovations tested the patience of the audience to the fullest.

One of the reasons that the Paris premiere of The Rite of Spring created such a furore was that it shattered everyone’s expectations.

The evening’s program began innocently with a performance of Les Sylphides. However, as the follow-up piece, The Rite of Spring turned out to be anything but spring-like.

One of the dancers recalled that Vaslav Nijinsky’s shocking choreography was physically unnatural to perform; “With every leap we landed heavily enough to jar every organ in us.”

The music itself was angular, dissonant and totally unpredictable. Despite its inauspicious debut, Stravinsky’s score for The Rite of Spring today stands as a magnificent musical masterpiece of the twentieth century.

The production, along with another Stravinsky ballet, Petrushka, will receive its Irish premiere at the Black Box Theatre on Monday July 22 during the Galway Arts Festival, which runs from July 15 to 28.

The show was promoted in the ABSOLUT Festival Gallery, Galway Shopping Centre, with 10 dancers from the Fabulous Beast Dance Theatre, wearing animal headpieces/masks from The Rite of Spring.

The show is choreographed by Michael Keegan-Dolan, whose extraordinary interpretation of Giselle was one of outstanding shows of the 2008 Galway Arts Festival.

Keegan-Dolan’s production of The Rite of Spring premiered at the London Coliseum in 2009 to critical acclaim and an Olivier nomination. The Times called it “inspired” and “exhilarating”.

The Galway production will feature concert pianists Lidija and Sanja Bizjak; the Tony and Olivier Award winning designer Rae Smith (War Horse); lighting designer Adam Silverman, whose work was last seen in Galway in Misterman in 2011; while the costume designer for Petrushka is Doey Lüthi.

Paul Fahy, the Galway Arts Festival artistic director, said that “We are thrilled to work with Fabulous Beast and our co-producing partners on what promises to be one the most exciting dance productions in Ireland this year. Michael is one of the most imaginative and brilliant choreographers and directors working on the international stage.”

Lead image via The Guardian.