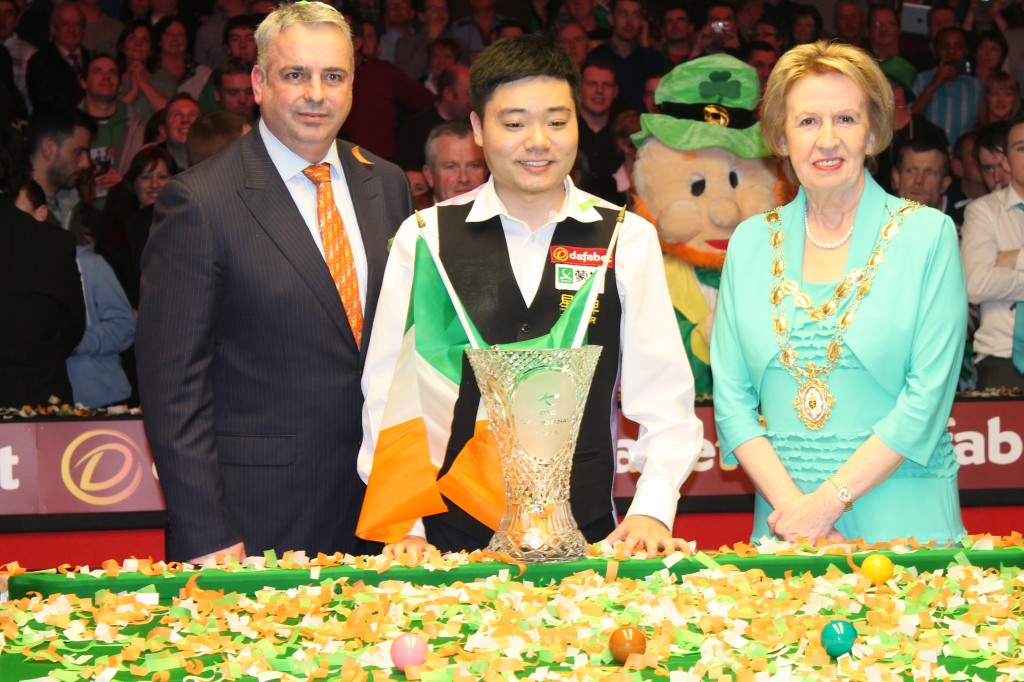 It was all to play for in a gripping grand finale at the Dafabet Players Tour World Championship in Galway last night.

Speaking exclusively after winning the grand final Mr Ding said; “I played well all week, it’s very hard to win every game, and I won four games this week.”

Adding to this the Chinese native said; “I am working hard, and I feel myself very strong.”

When asked about the upcoming China Open and the world championship, the newly crowned snooker champion said he was confident to play the remaining tournaments; “I think I can win more tournaments, I am playing good.” He added that it is all about keeping the form and playing hard.

He added that he will be going straight to the bank with his €100,000 prize money from last night’s grand final.

There were tense moments at the Bailey Allen Hall in NUI Galway, as Ding was slow to get going in his stride. Australian Robertson began impressively in the game. With only an hour into the game, Robertson had a brilliant clearance as Ding missed a red leading 55-12.

The Australian was 3-0 at an early stage only needing one more for the title, but Ding was not about to give up easily and was fighting hard for the lucrative €100,000 prize.

90 minutes into the final, Ding pulled a frame back with breaks of 52 and 70; he was trailing Robertson 3-1. Ding began to fight back with an impressive 130 total clearance. He trailed his Australian opponent 3-2.

Battling it out to the end Ding cleared the yellow to pink to make a great finish to the event. Ding Junhui had an amazing fight; back from 3-0 down to beat Neil Robertson 4-3 in a classic finish to the Dafabet PTC Grand Finals.

Ding had played against Robertson in the past and ahead of the grand final said he was looking forward to the game. Ding is finishing his year on a much better grounding than he started as he is now the world snooker champion.

The MC welcoming fans to a crowded house in the Bailey Allen Hall in Galway was RTÉ’s Hector O’hEochagain and also in attendance was mayor of Galway.