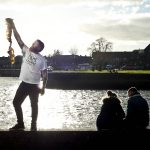 By Áine Kenny Famous Galway restaurateur, JP McMahon, held his symposium Food on the Edge in NUI Galway this year. The conference took place on Monday 22 and Tuesday 23 October in the Bailey Allen hall. Food On The Edge is internationally influential food convention that has taken place annually in Galway City since 2015. This year’s theme is conversations. The … END_OF_DOCUMENT_TOKEN_TO_BE_REPLACED