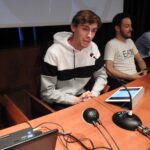 Aontú representative for Tuam, NUI Galway student Luke Silke, has called for an immediate update from Minister Simon Harris regarding plans for reform of the SUSI grant scheme.  Following the release of documents from the Department of Further and Higher Education obtained by the party under the Freedom of Information Act it was revealed that students whose parents have … END_OF_DOCUMENT_TOKEN_TO_BE_REPLACED