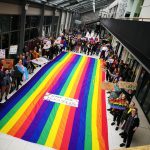 By Áine Kenny NUI Galway made history last month when it became the first Irish university to hold a pride march on campus. The march took place during GiGSoc’s Rainbow week. Students and staff marched from the Quadrangle all the way to Áras na Mac Leinn, where a series of talks were held afterwards. SIN spoke to Maeve Arnup and Oissíne Moore, Co-Auditors of … END_OF_DOCUMENT_TOKEN_TO_BE_REPLACED