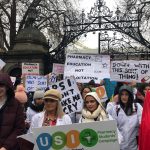 By Martha Brennan  Pharmacy students across the country breathed a sigh of relief this past week as they welcomed the removal of a ban on paid work placements.  On 23 January, it was announced that the ban would not continue after lengthy protests from current and past students, as well as the Union of Students in Ireland.   Anyone completing a pharmacy degree from … END_OF_DOCUMENT_TOKEN_TO_BE_REPLACED