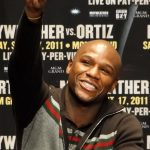 Note: This post was originally published in SIN's print edition before the announcement that the fight was back on. By Markus Krug It has been a turbulent time for boxing’s own Floyd Mayweather Jr. He went from retired former World Champion in boxing to facing unbeaten kickboxer Tenshin Nasukawa in the Rizin Fighting Federation, and back to retirement in a matter of days. … END_OF_DOCUMENT_TOKEN_TO_BE_REPLACED