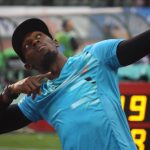 By Oisín Bradley The worlds of football and athletics alike have been captivated by Usain Bolt’s decision to swap the running track for the football field as he tries to forge a path into the world of football.  The World record 100 metre runner and eight – time Olympic Champion scored a brace for Central Coast Mariners in a trial game, and has caught the eye of Maltese … END_OF_DOCUMENT_TOKEN_TO_BE_REPLACED

By Caroline Spencer 2021 YouTube was not made with me in mind, and rightly … END_OF_DOCUMENT_TOKEN_TO_BE_REPLACED