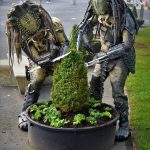 Akumakon is the only anime and manga convention held in the West of Ireland, and took place in a across the NUI Galway campus from Friday 20 to Sunday 22 January. Once before almost completely unknown to the world outside Japan, manga (Japanese comics) and anime (Japanese animation) have become a global phenomenon. Akumakon 2017 kicked off at 7pm at the Bailey Allen Hall, … END_OF_DOCUMENT_TOKEN_TO_BE_REPLACED