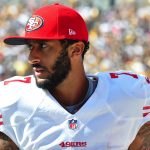 By Darragh Nolan Broadly speaking there are two sides to the Colin Kaepernick debate. There are those who support his decision to protest against police brutality and racial discrimination. On the other side, some believe taking a knee during the national anthem was disrespectful and unpatriotic. Generally those that support Kaep believe his status as a free agent is a … END_OF_DOCUMENT_TOKEN_TO_BE_REPLACED