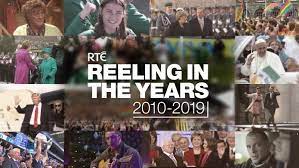 It goes without saying that RTÉ’s Reeling in the Years has been a firm family favourite for years. As a country that boasts such a rich heritage, it’s hardly surprising that Ireland would pass up the opportunity to relive history through this weekly nostalgic documentary. While it reflects on years gone by, viewers find themselves enthralled in memories and the personal stories associated with seminal moments in history. Even the theme song evokes a strong sense of nostalgia and excitement as you sit back and reflect on the events of the selected year.

After several successful seasons and countless repeats, the new series of the programme focuses on the 2010s and seems to have been welcomed with open arms by many. But what is it about Reeling in the Years that appeals to the Irish public? Is it the overwhelming sense of nostalgia? Is it recalling where you were at a particular moment in time? Or, as a nation, are we just obsessed with recalling the past?

I asked a friend of mine the same question to which she replied, “It’s just so Irish!” which sums the series up perfectly. I wonder if other countries have a programme devoted to recalling the formative moments of their country’s history.

There is something really special about sitting around the TV watching the series with your family and friends. With every episode accompanied by a playlist of number ones, it is an instant conversation starter as you begin to recollect the years gone by. All of a sudden, you are discussing where you were when you heard the startling news of Bloody Sunday, the Twin Towers, the Haiti Earthquake, or the election of a new President. Next, you’re racking your brains to remember who won the All-Ireland that year and trying to remember who was Taoiseach at that particular point in time.

The programme provides a platform of discussion and nostalgia that seems to appeal to every generation. Ireland is a nation renowned for its storytelling and giving a programme like Reeling in the Years a platform gives Irish people a chance to share their own stories of times gone by. It gives us the optimum opportunity to share our experiences and this valuable storytelling is then preserved for future generations.

From high profile Royal visits to the depths of economic depression, the series highlights both the positive and challenging moments. Many will agree that the series instils a sense of pride in what our small country has endured and has overcome in the past. There is a feeling of accomplishment as the programme demonstrates the resilience we have shown and the developments we have made throughout the decades. Whether it is a world news story or smaller local event there is a moment of time that will resonate with everyone for one reason or another. We are a proud nation and Reeling in the Years gives us an opportunity to celebrate and showcase our past accomplishments. Isn’t it worthwhile reflecting on what we’ve overcome as a nation and how much we’ve achieved? I think so.