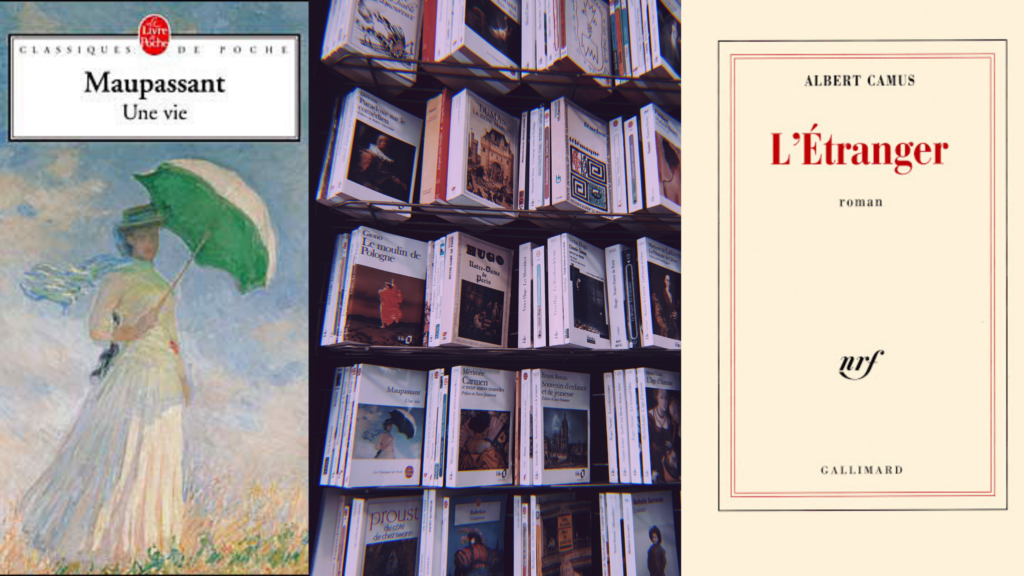 French literature secretes incredible treasures. Have you ever wondered which ones are the must-read books that you should tackle at least once in your life? They have frequently been among the best-selling books in history. Historical novels, paperback, fantasy novels, realistic novels, detective novels… The choice is extensive. Here are three books you should read to discover French literature.

First, Madame Bovary by Flaubert. You should know that more than a novel, Emma Bovary’s story has become a concept: bovarysme, which reflects a form of ambiguous maladjustment to reality. One thing led to another. This great masterpiece of French literature has recently given its name to a tearoom/bookstore in Toulouse (if you ever think of a visit post-covid). It is a space where you can take refuge when reality becomes disappointing or heavy. Immerse yourself in the world of books and sweet flavours because there is a Madame Bovary hidden in each of us. Madame Bovary, a young woman who had built a romantic dream world for herself, tries to escape in a sort of vertigo – the boredom of her life, the mediocrity of her marriage. When Flaubert published Madame Bovary in 1857, all the novel’s innovation lay in contrast between such highly accomplished art and the painting of such a common universe. “It was no longer a novel like the greatest had done,” Maupassant (another great French writer) said: “It was life itself. One would have said that the characters stood before their eyes as they turned the pages. The landscapes unfolded with their sadness and joy, their smells, their charm, the objects also appeared before the reader as an invisible power invoked to them, hidden somewhere”.

Talking about Maupassant, he wrote Une Vie (A Woman’s Life) which is one of the best books I have ever read. Jeanne, the only daughter of Baron and Baroness Le Perthuis des Vauds, joined the family home after spending several years at the convent. At the dawn of her new life, the young girl is impatient. All the enthusiasm, even Normandy’s rain, does not seem to be an obstacle to her happiness. Installed in the house, she is delighted, and her meeting with Julien de Lamare brings about the climax of this happy period of her life. Quickly, she marries the young man, convinced that she had found the love she dreamed of in the convent. Unfortunately, Julien will not be the loving and caring husband she has hoped for. The young Jeanne goes from disillusionment to disillusionment, living in latent boredom, a significant sickness that nothing comes to fill. “But now the sweet reality of the first days was about to become the daily reality that closed the door to vague hopes, to the charming worries of the unknown. Yes, the wait was over. So nothing more to do today, tomorrow or ever.” This first novel by Maupassant is a remarkable painting of Normandy’s local customs in the 19thcentury. Maupassant denounces social laws and the hypocritical constraints they impose on women and the conditions linked to nature, weighing on every human being. If the novel is firmly pessimistic, it is carried by beautiful writing so intense that we forget the darkness to retain only the essence, the purity.

When the publishers Gallimard published L’étranger in 1942, Albert Camus was not yet thirty years old. Critics of the time welcomed this short novel, the first in the tetralogy “The Cycle of the Absurd”, half-heartedly and yet, seventy years later, this early work is by far the best-known Nobel Prize in literature. The narrator, Meursault, lives in Algiers, which in this first half of the 20th century is still the eponymous prefecture of a French department. Insensitive to the world around him, this uneventful man has a most atypical personality. The daily events, the things of life, don’t affect him and appear to glide over him like raindrops on a bird’s feathers. Stoic during his mother’s funeral, whose body he refuses to see, reconciling with his two neighbours of bearing with the primary behaviours, ready to marry his girlfriend Marie despite the fact that he does not really like her, Meursault takes life as it comes. Everything is useless to him, and nothing matters. After a horrific event, L’étranger suddenly plunges into the trap of absurdity. With a great humanist message, L’étranger is a classic of French literature and an absolute must read.