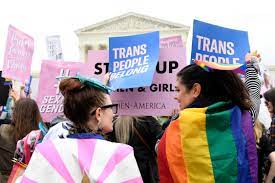 The weather was exceptionally mild, there was no risk of rain nor shine. I was comfortable in my thin red jacket as my eyes darted around my surroundings, eventually locking onto a black rectangle out of place on a Covid-19 restriction sign strapped to the bicycle shelter across from the concourse’s Bank of Ireland branch. “WOMAN noun: Adult human female”

It’s what I was looking for, but didn’t want to find. Transphobic stickers, the likes of which students have been finding all over campus. It is a slogan and symbol of Trans Exclusionary Radical Feminists (TERFs), a term I’m sure you’ve come across recently. The slogan is trans exclusionary as it intends to claim that transgender women are not women, that they are separate from women as a whole. Many of these TERFs claim that trans women are “men invading women’s spaces”, a deeply transphobic and discriminatory belief.

I pulled out my wallet and grabbed a fifty cent coin, with which I began to remove the sticker. The coin was used as it’s not uncommon for these people to hide razors beneath their stickers to snag dissenting fingers such as my own.

The people who put up these stickers would say I’m infringing on their right to free speech by doing this, and sure enough when I publicised what I was doing online I got flooded with replies from these TERFs calling me a misogynist, a bully, a clown, using a wide variety of ways to demean me. I even got labelled as a “totalitarian idealogue”.

However, I would counter this claim by saying my actions (and those who have done the same) were in the name of protecting transgender people. I fall under the trans umbrella myself, and seeing this hate towards me and others in my community is deeply harmful, and it is our responsibility to make sure we all feel comfortable living as who we are and to not allow people to attempt an infringement on our right to exist, with their use of “freedom of speech” as their defence; almost as if to make themselves the victims.

And so from these TERFs grew organisations. These organisations often label themselves as feminist or as promoting gay rights, but if a feminist or LGBTQ+ rights activist includes transgender people in their activism, they get labelled as deluded sell–outs and fake activists. They avoid explicitly calling attention to them being trans exclusionary, preferring instead to use terms such as “male exclusionary”, further compounding how they do not see trans women as women.

But you might find yourself asking: “why have students been finding these discriminatory stickers all over campus?” Well, I am a part of a group of students who have written and proposed a motion at Comhairle Chomhaltas na Mac Léinn which aims to deplatform hateful and discriminatory groups as an expansion and strengthening to already existing SU policy, and within this there is a list of organisations that the motion claims fit this description, including what the motion labels as TERF groups. Because of this, these groups and their supporters are up in arms.

We cannot talk about this motion and the philosophy behind it without first talking about Anti-Fascism and Anti-Fascist Action. Anti-Fascism is a political movement which aims to oppose the growth of fascism and resist fascist governments where supporters of the far-right ideology have already seized power, as the name implies. The movement started in 1920s Europe, and recently the Anti-Fascist movement has seen a great resurgence in recent years alongside the global rise of totalitarianism.

To fully understand Anti-Fascist Action we need to understand how fascism itself spreads and proliferates within a society. Contrary to popular belief, fascism doesn’t rise through a vast swathe of the population becoming extreme nationalists, only a core few are unabashedly fascist, with the rest of the support coming from fascist sympathisers. Fascist sympathisers usually turn a blind eye to the more extreme elements of fascist groups in order to further the parts of the groups’ philosophy they agree with. A good example of this is President of the Philippines, Rodrigo Duterte. Under his leadership, extrajudicial killings of drug users has skyrocketed, though he remains popular as the Filipino population turns a blind eye in favour of the economic growth the nation has seen under him.

And so Anti-Fascist Action believes it must also work against these fascist sympathising groups, and this would include explicitly bigoted and discriminatory organisations, such as the topical Transgender Exclusionary Radical Feminist groups.

And it is this philosophy which the motion, named “Opposing Fascism, Far-Right Extremism, and all Forms of Discrimination”, builds itself upon. The stickers around campus and the vitriolic online response to the motion has shown that there is an issue with transphobia in our University, there are people in our community who wish to deny the rights of transgender students and they unashamedly spread their harmful messaging on our campus. Nobody is under any illusion that the motion will solve this issue by deplatforming harmful groups, but it’s a step in the right direction. Students should work together to show this vocal minority that their bigotry is unwanted on our campus, and to prove to them that we, as a community of students, want trans people to feel welcome; that we believe trans men are men, trans women are women, and non-binary people are vibing in the void of nothingness.