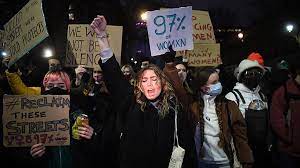 Following the recent news of Sarah Everard’s death, we can’t help but think about how we can help to prevent something so horrific from happening in the future. Social media was drowning in sexual assault/harassment awareness posts and how people, both male and female, should be looking out for one another when such situations arise. There are people out there who walk to their buses after a late-night shift in work, or take a late-night walk because it’s a normal routine for them, but when you hear stories related to women being attacked or kidnapped it does start to make us all very uneasy and a feeling of unsafeness sinks in. Walking to my bus stop every night after my shift is a daily ritual and it’s something that I’ve familiarised myself with, but nowadays I do feel a little on edge. I’m not the only woman out there who feels this, I know there are a generous number of women out there who feel the exact same, but perhaps using the word “generous” is unsuitable because the number of women effected by this is large, quite large.

Even though there is a certain feeling of helplessness that comes with the fear of becoming victim to such horrific things, we as a society, should have the power to make people feel more at ease and here are some ways that society should integrate into daily routines:

We live in a world where our heads are constantly looking down on to a phone screen or how our precious devices are always stapled to our fingertips, but that isn’t necessarily a bad thing especially when we use our mobile phones to keep communication open between family and friends. The power of one text cannot be emphasised enough. Three little words, “I’m home safe” hold a greater power than any of us will ever have the will to comprehend. You will not believe the feelings of relief and happiness that come with those texts. There’s always a certain adrenaline rush when we see someone typing to us, but that doesn’t compare to the smile on our faces when we hear that our loved ones are home safe. One simple text that will only take a few seconds to type. Do not underestimate that!

If you’re out late at night whether it be running for your bus after work, or taking a walk, then it would be a smart option to have someone with you. Personally, I walk halfway to my bus stop with my close friend who works alongside me in work and there is no better feeling than having company beside you when you’re walking through dark quiet streets. People don’t realise the importance of having a friend or family member with them if they’re out late and though sometimes our social batteries can drain quickly, being in someone’s company doesn’t mean you have to keep talking with them every second, walking in silence is more than okay too, as long as it’s with someone and not alone.

When we were young, it was drilled into our heads not to talk to strangers and we still use that rule in this day and age, but we also need to take into account that not all strangers are dangerous. There is the concept of trying not to become involved in the business of others, but when it’s in relation to one’s safety then it should be okay to intervene, but only if you aren’t putting yourself in danger’s way too (a valuable lesson I learned during my First Aid Responder Training: Scene Safety). You see a woman at her bus stop and you can tell the male beside her is making her feel uncomfortable by getting too close to her, what do you do? It takes no effort to approach her and ask if she’s okay.

What would you do if you witnessed a man grabbing a woman’s dress in a club and started pulling on it, but you can see from her facial expression that she’s terrified? It takes no effort to go over and escort her to safety or to alert one of the security guards on the door.

What I’m saying is it shouldn’t take any effort to make sure that the women in our society are safe. Reality is scary, but it’s the people that live in our society that make it scarier and that is something we need to work on.