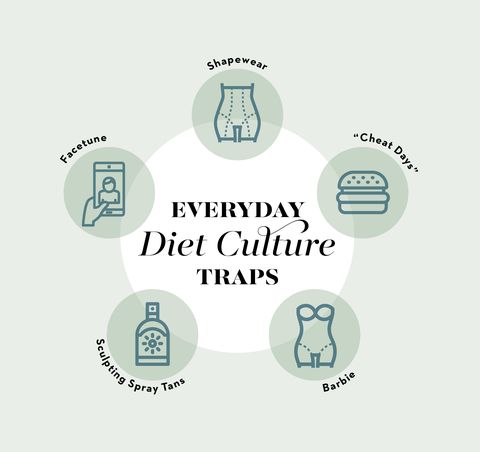 Every young girl has felt the pressure to look a certain way, or to be a certain weight. The media has brainwashed generations of women into believing that their self-worth is intrinsically linked to their physical appearance; and that if they do not meet the standards of whatever is considered to be the ‘ideal’ body image of a given era, they are lesser than those who do.

Pardon my French, but that’s BS…

Diet culture is not, and never has been, there to ‘help you become a better you!’ or ‘shed that last 10lbs!’. Diet culture – more generally, the hegemonic beauty ideal upheld by the media – exists solely to breed insecurity within people in order to sell products that the consumer doesn’t need. Waist trainers; diet pills; skinny teas – the list goes on. Considering that the US weight loss industry was worth $72 billion in 2020, it is clear to see that corporations are heavily invested in our own self-loathing.

In the era of social media, the pressure for women to conform to a standard of beauty is more prevalent than ever. Although the online body positivity movement has helped women across the globe to learn to love themselves, and forced many big fashion labels to showcase a more diverse range of body types; some influencers still portray unrealistic beauty standards to impressionable young girls.

Many have been held accountable for doctoring photos to smoothen skin and cinch waists or refusing allegations about cosmetic surgeries. However, these women are just as much victims to the system as the rest of us, and are often casualties of harsh criticism about their appearances from online trolls.

The fad diets and extreme workout routines that influencers often endorse – be it via a paid sponsorship or from innocently keeping their followers informed about their daily routines – have an extremely detrimental effect on young girls’ self-image. A 2012 study of Irish adolescents (1,841 girls, 1,190 boys) found that disordered eating was more prevalent among girls than boys.

This is not to say that men and boys are exempt from the pressures of diet culture. In fact, particularly in recent years, it is quite the opposite. Many young men have taken to ‘bulking up’ in order to attempt to replicate the muscular physiques they see on social media and the silver screen. According to WebMD, boys who exercised specifically to gain weight in their teens were 142% more likely to engage in disordered eating. There is also a newfound onus on mens’ skincare, facial hair maintenance, and the likes. While emboldening men to take pride in their appearance, and find confidence in the process, is of course something that we as a society should encourage; this fledgling market bears the same seal of capitalist greed that has invisibly marred the womens’ beauty industry for years.

For men and women alike, finding joy and creativity in self-expression should be paramount to societal standards of beauty. If losing weight helps a person to become a happier, healthier version of themselves; that is an incredible thing that should be celebrated. However, the narrative that ‘nothing tastes as good as skinny feels’ is offensive, outdated and completely untrue and we as a society should abhor any person or institution that tries to perpetuate it.