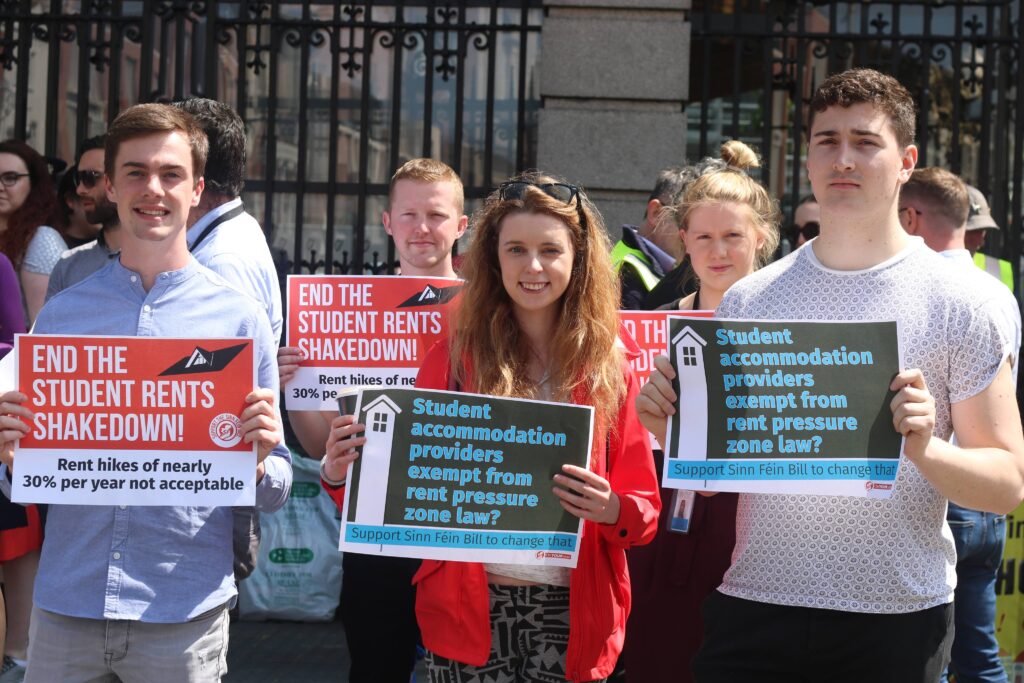 The Union of Students in Ireland (USI) have launched a campaign to pass a student accommodation Bill into law which has been backed by the Student’s Union.

The bill, which is formally named the Residential Tenancies (Student Rents and Other Protections) (Covid-19) Bill, aims to address issues that student tenants have faced throughout the course of the Covid-19 pandemic.

Such issues include allowing a waiver on rent for students who cannot access accommodation due to lockdown or due to a change in semester start and finish dates.

It also is aiming to allow students to end rental contracts early in case of another wave of the virus or of nationwide restrictions, for landlords to stop withholding deposits and to return prepaid rents if such a situation arises, and for no student evictions to occur during the pandemic.

Students’ Union President Pádraic Toomey has stated that while the Residential Tenancies Bill proposed by the USI will not fix the student accommodation crisis, it will be an important step in the right direction.

“NUI Galway students have been hugely impacted this year in so many ways but the stress of paying for accommodation that they sometimes aren’t even using has left many at breaking point”, added Toomey.

“Our students were advised to get accommodation by the University and now find themselves paying for rooms that they can ill afford”, said Students’ Union Vice-President and Education Officer, Emma Sweeney.

Sweeney also hopes that the bill would go some way in ensuring that students would not be left in this position again.

The USI have stated that they would be “engaging with politicians to get their support for the bill as well as mobilising the student movement in Ireland to also engage and speak with their representatives, emphasis their need for the bill to be passed.”

Sinn Féin TD for the Galway-West constituency, Máiread Farrell, has stressed the importance of passing the Residential Tenancies Bill into law and the greater protection that it will provide for student renters.

“This Bill incorporates key demands from the USI and if it becomes law, a student will be able to end a tenancy in student specific accommodation by serving the landlord with a notice of termination of 28 days”, stated Farrell.

“It also allows for the prompt refunding of accommodation fees if the accommodation is not taken up or vacated due to Covid 19 related public health restrictions.”

Farrell also stated that many students and their families had faced financial difficulty during the lockdowns this past year, due to struggling to get refunds on rental costs from student accommodation providers, and many being forced to pay for accommodation that they were prohibited from using.

The Residential Tenancies Bill which was launched outside Leinster House last week has already garnered support from various political parties such as Sinn Féin, Social Democrats, Labour Party, -People Before Profit, and Independents for Change.

Farrell confirmed this strong support for the bill, stating that there was “strong cross-party support in the Dáil for this bill with 56 other opposition TDs signing up. It is our hope that the government parties can also support the sensible proposals in this bill and work with us to make it law.”

USI Vice President and former NUI Galway Student Union President, Clare Austick, has stated the Bill came about because of an emergency accommodations campaign focusing on more protection and more flexibility for student renters and from lobbying with TDs.

“We spoke with the Sinn Féin Spokesperson for Housing Eoin Ó Broin who then agreed to bring forward this Bill” explained Austick. “It became known as the USI Accommodation Bill which basically focuses on student-built accommodation and students during Covid but also extends beyond Covid.

So, it is really really important that this bill passes to ensure that student renters have the flexibility and the protection that they deserve. This has been going since last March, so hopefully it will be passed because of debates and discussion in the Dáil and the Seánad in the next couple of weeks.”