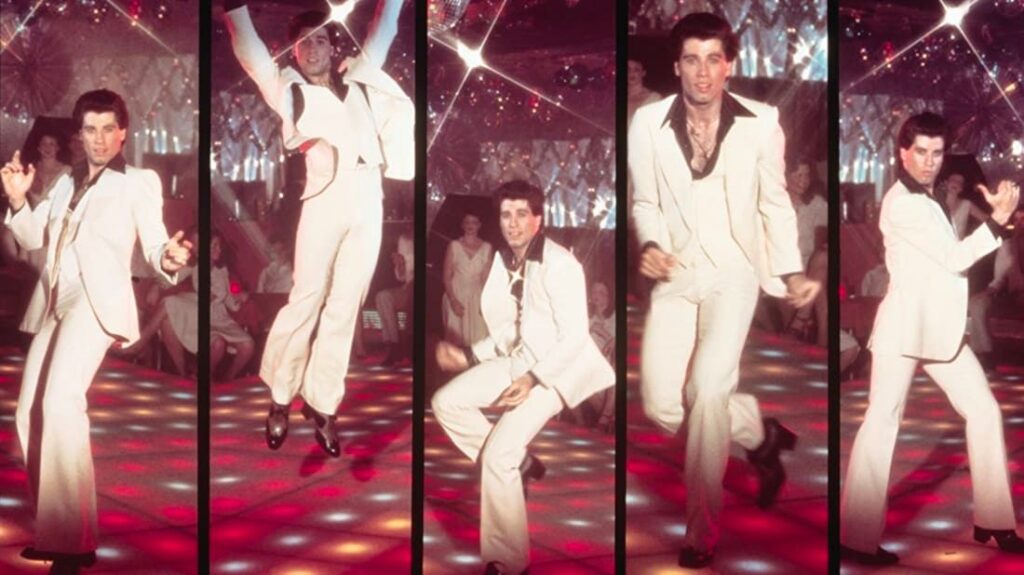 Saturday Night Fever was first released in 1977. The movie was a massive commercial success and had a colossal effect on popular culture in the late 1970s. It helped to popularise disco music around the world and cemented John Travolta as a huge movie star. The soundtrack includes songs by the Bee Gees and is still one of the greatest selling movie soundtracks of all time. These days, the film is mostly remembered for its extended dance routines, which you do have to admit are still incredible. But this movie is so much more than that, and if you can look past its cheesy exterior for a moment, you will find a film that has a lot of say about the era it comes out of.

Saturday Night Fever tells the story of Tony Manero, a young working-class Italian-American from Brooklyn who spends his weekends dancing and drinking at the local discotheque. He is working a dead-end job, his parents do not respect him or support him, gang violence and racial tensions have ravaged his neighbourhood, and he feels hopeless, restless, and trapped. The one thing he is good at is dancing, and when he is out on the floor, he is a champion.

On the surface this may feel like a pretty vapid movie, just your average run of the mill coming-of-age character study. But Travolta’s performance elevates the character Tony Manero into something much more interesting than that. His feelings of utter hopelessness at the possibility of working in a hardware story for the rest of his life. His reactions to the prejudices and chauvinism of his friends. His inability to fully express himself to Stephanie Mangano, his dancing partner, and the girl he loves. You feel for Tony. He is a smart kid who never got a chance, who has never been given the opportunity or the tools he needs to fully embrace his potential both professionally and emotionally. Tony’s friends’ worship and idolise him, but the film itself never does. It allows us to see the truth behind the façade, that he is trapped in a self-perpetuating class system, where success is always just out of reach.

While it is Travolta’s performance that carries the movie, there are some fantastic performances by the supporting cast. Donna Pescow plays Annette, a woman hopelessly in love with Tony, but the feelings are sadly not reciprocated. In a desperate plea to get his attention she agrees to go for a drive with his friends while excessively drunk, and what follows is quite frankly difficult viewing. Her heartfelt sincerity and unrequited pining make her character’s journey one fraught with tragic misery.

Barry Miller plays Bobby C, a young man conflicted about whether he needs to marry his girlfriend, who has fallen pregnant and is determined to keep her baby. Bobby’s anxiety, sense of duty, and the lack of empathy from his friends, becomes a real indictment to the negative consequences of toxic masculinity, at a time where men were encouraged to bottle up their feelings, rather than express themselves in a healthy manner.

But of course, we cannot ignore the dancing. In preparation for the movie John Travolta danced for three hours every day to get into shape, and it shows, he is fantastic. Tony Manero’s white suit, which he wears in the final dance number, is one of the most iconic costumes in movie history. Legendary film critic Gene Siskel said that this was his favourite movie of all time and described Travolta as “like a peacock on amphetamines”. The film captures the vibe, rhythm, and atmosphere of 1977 so well, and includes some of the best dance routines ever committed to film.

What sets this movie apart is that it defies expectations. From the outset, it feels like it is just going to be a piece of broad entertainment. Produced just as disco music was taking off in America it could have been a cash grab, a cheap attempt to tap into what was popular at the time. But what you get is a thoughtful intelligent film, a fully realised character study, a cultural critique of ethnic class struggles, and most importantly, a disco dancing spectacular. Do yourself a favour and give this old movie a chance, and while some aspects may feel a little bit outdated, I think it has tapped into something special. 4/5 stars