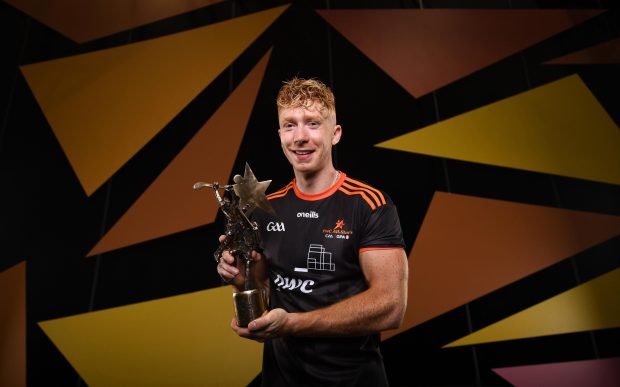 It was a momentous occasion at the All-Star awards for the 2020 season, as two NUI Galway students picked up awards for their achievements in last year’s competitions.

There were nominations for many of the college’s students both past and present, and there was much pride in NUIG GAA circles as the University picked up a gong apiece in the two respective sports.  In hurling, Limerick and Patrickswell man Cian Lynch picked up his second All-Star of his career, while in football, Kilmaine youngster and defensive powerhouse Oisín Mullin picked up his maiden All-Star.

It’s been a rollercoaster of a year for Oisín Mullin, who only truly broke into the Mayo panel in 2020.  However, the man from Kilmaine took to the tasks handed to him with a level of ease, marking some of the biggest names of the game in his side’s Allianz League campaign and their run to the All-Ireland SFC Final, including the likes of Con O’Callaghan.

Mullin made his Championship debut in Mayo’s campaign opener against Leitrim and earned rave reviews in games against Leitrim, Roscommon and Galway, as well as in the All-Ireland series vs the likes of Tipperary and Dublin.

Whilst there were times in the Tipperary clash where James Horan’s charges seemed open defensively, for the majority of the Championship campaign there was a sense of solidity at the back, and Oisín Mullin was an intrinsic part of that watertight nature, and such exemplary performances saw him land the Young Footballer of the Year award.

Whilst the youthful Mullins impressed despite his years, Cian Lynch of the Limerick hurlers is a man who has completed the exceptional achievement of two All-star awards now.  The 2020 All-star will be added this to a cabinet which is over-flowing with accolades.

The All-Ireland medal which he picked up last year is his second to date, and will go alongside his 2018 Hurler of the Year gong.  The half-forward was a central figure as the Treaty County swept assuredly to Munster and All-Ireland glory, chipping in with a score or two in every game en route to the decider in Croke Park.

Lynch earned rave reviews as he stepped up to the plate in the dying echelons of the All-Ireland semi-final vs Galway, firing over two scored and raising the white flag as the game was in the melting pot.  The dependable half-forward may not have got his name on the score-sheet in the decider, however a sumptuous move from the man from Patrickswell almost resulted in him rattling the Waterford net.

Both men will be targeting a defence of their provincial crowns this season, and many around the GAA circles of the University will be hoping that they will be able to replicate their exceptional form in their county colours on the pitches of Dangan in the maroon of NUI Galway before long.