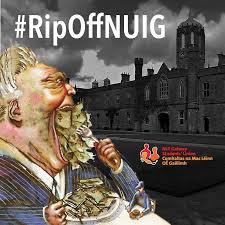 Most Universities expect students to pay tuition fees to cover the cost of on-campus facilities and services that are offered to them throughout the year. Of course, these tuition fees do not include accommodation costs, book costs, or transport. So what are we paying for really?

This year unlike the rest, most of us have not set foot on campus grounds all of last year and probably most of this year also. So what exactly did most of us pay three grand for? From the very beginning of the year, there was minimal support available for students not to mention the outrage NUI Galway brought upon itself by charging repeat fees almost twice the price most other universities charge. NUI Galway has shown itself in the worst possible light throughout the past year, no support, constant nagging for money and fees and making it an endless battle for students to receive their refunds from on-campus accommodation.

I ask you again, what are we paying for? The library that most of us can’t access due to limited spaces and unavailable booking times? A gym that has been opening and closing since March, or is it perhaps the lecture halls that none of us visited this year? It is an outrage that we are still being forced to pay for facilities we do not have access to. If the university cared for their students, they would not ask for the full tuition price or perhaps would have cancelled it altogether as they seem completely out of the loop.

Most students like myself are supporting themselves through a full-time job or internship which has taken up most of their time, just to be able to pay for their education. Funny how you need to work 40 hours a week to afford education when at the end of a rough shift you are left unable to so much as look at a book, never mind write an assignment. How are Irish students supposed to feel like their efforts amount to something and that their university cares for them when in response to our pleas for help they charge us extra?

Personally, I felt like I just threw my hard-earned money into a dark abyss where I will never see my investment benefit me at all. Last year the university had to cancel most internships and placements as well as ERASMUS which means we are quite literally being robbed blind by a money-hungry institution which puts its students in positions where they are so stressed and overworked that they no longer have the desire for knowledge.

Rather than focusing on how much you should charge each student and what the best way to suck money out of us and our parents is, why not focus on student mental health? Now more than ever the University needs to provide additional support to students especially those who come for low-income families who are struggling to stay afloat. I truly believe the only way NUI Galway will ever listen to its students is if they fall down in ranking as the top 1% of universities worldwide, or if there is a public outrage large enough to force the university to rethink their ways. I do not see the University ever listening to us unless they see that our outrage is costing them money, which is quite frankly, disheartening.