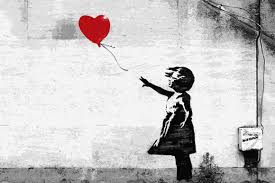 The street artist seems to have firmly cemented himself (or herself!) in the ‘Unsolved Mysteries’ category of the world. Since they jumped into the street art scene in 1990, Banksy has slowly but surely captivated the world.

In more ways than one, he is a sort of weird, arty superhero. Real identity hidden, he appears and disappears across the globe, bringing attention to social and political issues before disappearing back into anonymity. His art being the only proof that he was ever there.

There is power in his lack of identity. His is nothing but his art, and his art is what Banksy is. There is no personal life drama, no tabloid headlines, nothing to distract from his work.

He is unforgiving of extreme capitalism, and frequently focuses on loss of innocence, as seen with his arguably most famous work Girl with The Balloon (2004), as well as Bomb Hugger (2003) and Kids on Guns (2003). The latter two pieces also touch on another of Banksy’s favourite subjects – the contrast of nature and love in the premise of war.

Bomb Hugger is credited as being one of Banksy’s earliest works, and is a black stencilled piece depicting an innocent girl hugging a bomb. Similarly, Kids on Guns is a silhouette of two children with a heart balloon between them, standing on a pile of explosives and guns. Makes you think, right?

Love Is In The Air is another of Banksy’s most famous works, and depicts a black and white rioter, about to throw a bouquet of delicate, colourful flowers. It has been reprinted millions of times, on tops, posters, bottles, even pencils.  Is it really just a piece of art to be enjoyed, or is there a pointed political message behind it?

It’s worth noting that the location of Banksy’s art is almost as significant as the art itself. Love Is In The Air was painted in Jerusalem, on its West Bank Wall, a wall which separates Israel with Palestine. While Israel claim it is an anti-terrorism measure, the Palestinians believe it is an apartheid wall. No matter its true origin and purpose, it is a symbol of suspicion and scepticism between two nations.

Banksy isn’t just an artist though – he is also a performer. Who could forget when his Girl with Balloon self – destructed at a sale, just after being bided on for $1.3 million? Or his faux – theme park “Dismaland”, a mockery of on Disneyland? It’s clear that Banksy is aware he is being watched by the world. How strange to be such a performer, and yet nobody knows his name.

Of course, not every single one of his pieces have deep symbolism. His 2009 art, Steam Roller Traffic Warden, humorously depicts a traffic warden seemingly flattened by a steam roller. Similarly, Lenin on Roller Blades (2003) shows exactly what you think it would – Lenin trying to roller skate. There’s no secret message, no thought – provoking symbolism. It’s simply a work of art made to be viewed and enjoyed.

Banksy has unquestionably taken the world by storm. Only last year, one of his paintings Show Me the Monet went for £7.6 million, or the equivalent of €8.6 million. His Instagram alone has 10.6 million followers, and his drawing Game Changer, depicting a little boy playing with a nurse superhero toy after discarding his other Batman and Spiderman toys, has gone on to become to become the symbol of public gratitude to the NHS during the Covid-19 pandemic. His latest piece in Nottingham, claimed on 17th October, blew up headlines across the world, and showed that despite his identity being unknown, Banksy’s presence on the world’s stage is always felt.