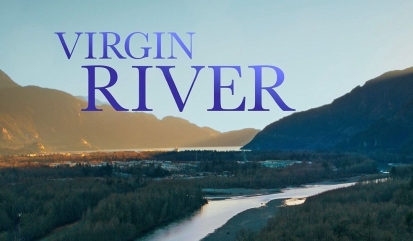 Virgin River is an American series on Netflix based on a novel. It has two seasons, the first season premiered in December 2019 and the second season premiered in November 2020, and it has been renewed for a third season later this year. It is set in a very remote town in Northern California named Virgin River, hence the name of the series.

The main character is Mel who is a nurse from Los Angeles who has moved to the town. The real reason for why she moved is not known until the episodes progress, however, it is clear that she is hiding something from the very start. She is brought to the town by the mayor, Hope, who is clearly dishonest about her job contract and her accommodation. She meets the local bar owner Jack who instantly takes a shine to her. She then starts working in the surgery with the doctor known as ‘Doc’ or Vernon, who is initially very unhappy with her being around. These are the four main characters in the series.

Mel is a kind and caring character, who plays by the rules, but it is clear she has a vulnerable side too. Jack is also a caring character and is fiercely loyal to his community and sees it as his duty to protect his friends and the people of Virgin River. Hope, although kind, is a very nosy character who tends to eavesdrop and gossip constantly about the other townspeople. Doc at the beginning is very unlikeable and is unnecessarily patronizing and undermining towards Mel, however, he changes his tune an becomes a very likeable and warm-hearted character.

I would highly recommend this series as it strikes the perfect balance of romance, crime, drama and sadness, making it a very worthwhile series to watch. I generally tend to not particularly like romantic dramas, however I very much enjoyed this series, and I feel it would be an enjoyable watch for anyone, particularly as it is not too cringey like many shows of this type. The acting throughout the series is also phenomenal, so it is very easy to connect with all the characters. The scenery was also very aesthetically pleasing and comfortable for viewing, as it was very green and lush and had plenty of scenes surrounded by rivers and forests. It also gave the series more originality and authenticity, and it gave a feel of life in rural California. It is definitely a feel good show,  and if you give this series a go, even if romantic dramas are not your favourite, I’m sure you will like Virgin  River!