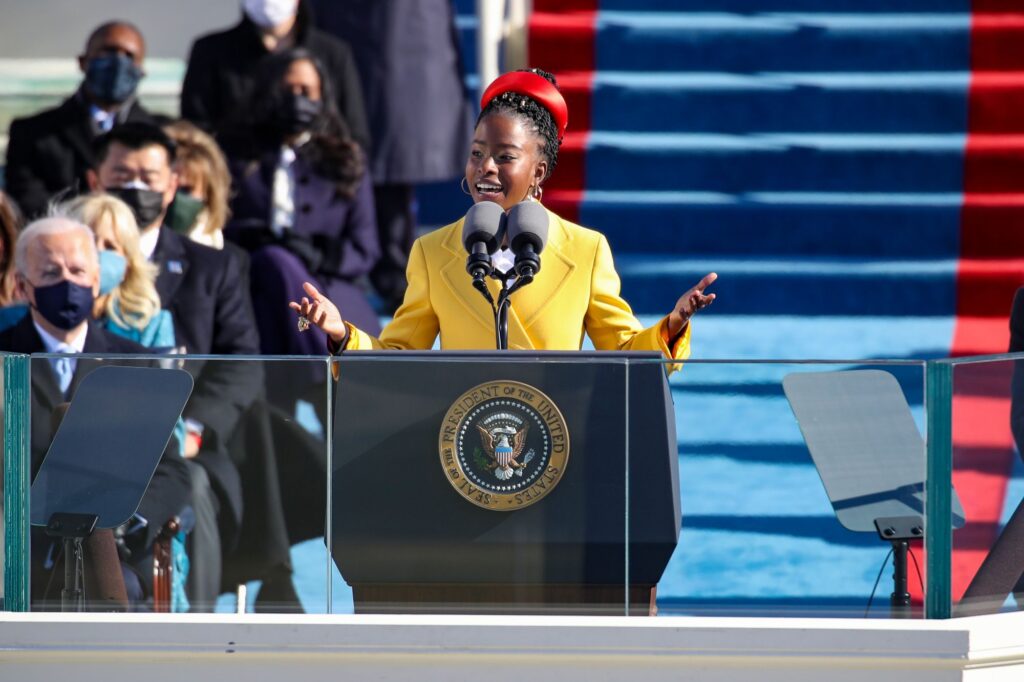 Who could’ve predicted that the most talked about person at the US Presidential Inauguration would not be Joe Biden or Kamala Harris, or even Bernie’s mittens? Instead, the title goes to Amanda Gorman.

I’m sure Amanda Gorman was well-known in poetry circles, but on the world’s stage she was a newcomer; an unknown woman who stood alone and performed her poem in front of 33.8 million people.

After months, if not years of uncertainty, of pandemics and storms and riots, the 22-year-old stood at the podium as a breath of fresh air. Her youthful figure, combined with her outfit of bright, block colours hinted at better days to come. That this was the turning point of an era; an era of colour that shed the darkness that had plagued it.

What perhaps made The Hill We Climb such an impactful poem was that Gorman did not shy away from the issues which have plagued America, but rather embraced them.

“Somehow we weathered and witnessed a nation that isn’t broken, but simply unfinished.”

Gorman has also been praised for the contemporary nature of the poem. Only two weeks prior the Capitol building had been stormed by Trump supporters, an action which shocked and horrified not just the nation but the world.

“We’ve seen a force that would shatter our nation, rather than share it. Would destroy our country if it meant delaying democracy. And this effort very nearly succeeded.”

The topical nature of The Hill We Climb served to highlight the importance of her words. What was especially commendable was how she managed to juggle a sense of unity with justice. While heavily encouraging the movement of “lay[ing] down our arms so we can reach out our arms to one another”, Gorman also gently reminds Americans that wrongs must be accounted for, with lines such as “It’s the past we step into and how we repair it”, and “We’ve learned that quiet isn’t always peace, and the norms and notions of what ‘just’ is isn’t always justice.”

While the poem itself is unquestionably evocative, there is power in Gorman’s presentation. Just like the caged bird ring she wore in honour of Maya Angelou, her hands danced in the air like feathers of a wing. Her soft yet strong voice carried through the air, captivating not just her fellow citizens, but citizens of the world.

What is especially poignant is in interviews she has said that throughout her early life she suffered from speech impediments. President Biden himself struggled with a stutter for decades. On Wednesday January,20th the world was shown there is no limit to what a person may become, or what they can achieve.

The Hill We Climb captured the zeitgeist of recent years; that although every country has dark days, it does not mean that every country is hopeless. Gorman’s poem showed that to truly appreciate a nation one must embrace its troubled history and faults as well as its successes. Her poem ended on a note of optimism, promising that “The new dawn balloons as we free it. For there is always light, if only we’re brave enough to see it. If only we’re brave enough to be it.”