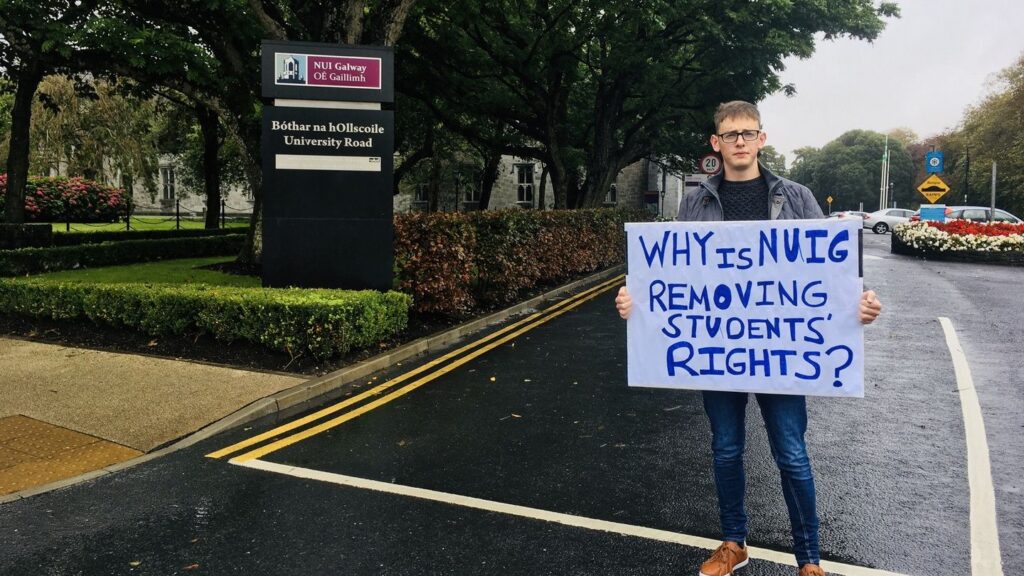 When NUI Galway announced on August 21st that all students must sign a new pledge called the ‘Community Promise’, I suspected immediately that students’ rights were being undermined. As I read through the pledge that fear was entirely confirmed.

The demand that any student showing symptoms of Covid-19, however mild, report to the University and, if instructed, get a Covid-19 test, struck me as a callous disregard for the right to privacy. Since when did privacy rights disappear? It seemed as if the framer of the ‘Community Promise’ had forgotten that such rights had ever existed.

By the time I reached the extraordinary commitment at the end of the pledge, which required students to agree to ‘change their behaviour’ whenever challenged by the University, the red lights were well and truly flashing. This broad, vague, seemingly innocuous statement had incredible ramifications.

Who would decide what ‘behaviour’ was acceptable? There was nothing in the Community Promise about taking the beliefs or opinions of students into consideration – if a student was challenged, they had to change their behaviour, no ifs, no buts.  Such a requirement flew in the face of individual autonomy. It would effectively have deprived students of the right to think and act for themselves.

After reading the pledge, I knew something had to be done. As students, we have rights. We are independent, autonomous individuals who take full responsibility for our own behaviour – playing the Covid-19 card does not allow the University to remove our rights or eliminate our freedoms.

For this reason, on August 25th, I launched a campaign against the ‘Community Promise’. This campaign involved posting videos outlining my concerns to social media (which received over 130,000 views), sending a voluminous amount of emails to various members of the University management and eventually picketing in the rain outside the Quadrangle.

I was incredibly fortunate to be supported by numerous fellow students who shared my concerns about the situation. Through our united efforts, the University came under intense pressure to drop the requirement. On September 9th, after weeks of campaigning, NUIG announced that signing the ‘Community Promise’ would not be mandatory.

The scrapping of the ‘Community Promise’ requirement was a major victory for students’ rights here at NUI Galway. It showed us that student voices matter, and that student protest is as effective as it ever was.

As we look to the future, it is my heartfelt desire that this situation would strengthen the resolve of every NUIG student to unapologetically stand up for our rights and come together as one to speak out when they are threatened. In this way, I know we can continue to effect positive change moving forward.

They need a flag around which they can rally, a body that can unite all students to fight a common cause.

NUIG used to have such an organisation. It was known as the Students’ Union.

Formally established in the 1960s, the NUIG Students’ Union was created to be a voice for students’ rights on campus. Its mission was lofty, admirable, and inspiring: it existed simply to “promote, defend and vindicate the rights of its members.” An injury to one would be an injury to all. It would unite the student body in defence of their rights.

Does this organisation still exist? If one judges by shiny posters, disposable cups and plastic photoshoots, the answer may be in the affirmative. Judging by actions and deeds, however, the NUIG Students’ Union as envisaged by its founders has long since departed this world. What remains today is a shell of an organisation, a mere shadow of what once was, a body without a soul.

The ‘Community Promise’, and the campaign against it, revealed the true state of our Students’ Union. When students’ rights were jeopardized at the beginning of this academic year to an extent like never before in the history of our University, concerned students were left – for the most part – to fend for themselves.

Our Students’ Union should have led the charge against the ‘Community Promise’. It should have spoken out clearly at the first breath of such a brazen power-grab by the university authorities. Instead, we beheld in appalled astonishment as the Students’ Union joined with the University for a press release to launch the document! The turkeys’ union marched out proudly to launch the Christmas campaign.

What an irony. What a mockery. What a tragedy.

The ‘Community Promise’ episode has shown all of us the importance and effectiveness of student protest. But it has also highlighted the existential crisis which now engulfs our Students’ Union. A crisis of leadership. A crisis of vision. And, ultimately, a crisis of relevance.

These are challenging times. The students of NUI Galway deserve a strong representative organisation that is capable and prepared to fight our corner. Members of the Executive Committee are paid tens of thousands every year to scrutinize the decisions of the university management and say ‘No’ when our rights are threatened and disregarded. Anything less than this is utterly unacceptable.

If we ever needed a real Students’ Union, we need one now. We just can’t afford to settle for less.