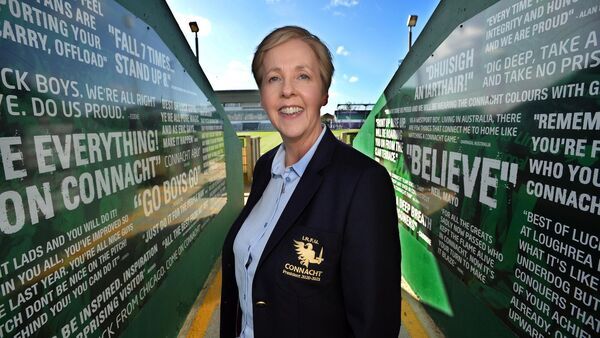 Newly appointed CEO of Connacht Rugby and NUI Galway graduate Ann Heneghan told SIN that she believes it was a serious mistake that Canterbury used a model for the launch of the new women’s Irish jersey, instead of a woman who plays rugby.

She went on to say that when launching the 2020 Connacht jersey, both men and women were used in their launch.  Heneghan, who took up the historic role in August, mentions other provinces took the same approach.

When asked if the media were doing enough in promoting women in sport, Heneghan said, “I think it’s the women really driving it and not so much the media, the media have a big part to play”.

She adds, “if you see the attention I’ve gotten since becoming the first woman President for a province, the media are all over it. But what about promoting the women’s game? The media have a big part to play”.

When asked if the Connacht women’s team would soon turn professional, she explained the difficulties facing the province in feasibly undertaking such a prospect.

“Even without Covid we would face challenges because we would need a dedicated tournament similar to the Pro14,” the solicitor from Partry in County Mayo stated.

Henegan mentions one turning point for Connacht Rugby was having women join the men’s committee in making decisions for both sides, which is now called the Adult Rugby Committee.

Connacht Rugby will be celebrating its 135th birthday with an online celebration with fans for this coming November, with more details for how they plan to mark such a landmark date in the province’s history being released in the next few weeks.

The Westerners have endured a mixed start to their season so far, edging out Glasgow at the Sportsground in their opening game, but falling to a heavy 29-7 defeat to Cardiff Blues at Rodney Parade the following week. Next up for Andy Friend’s side is a tricky tie against Edinburgh away from home on October 25th.