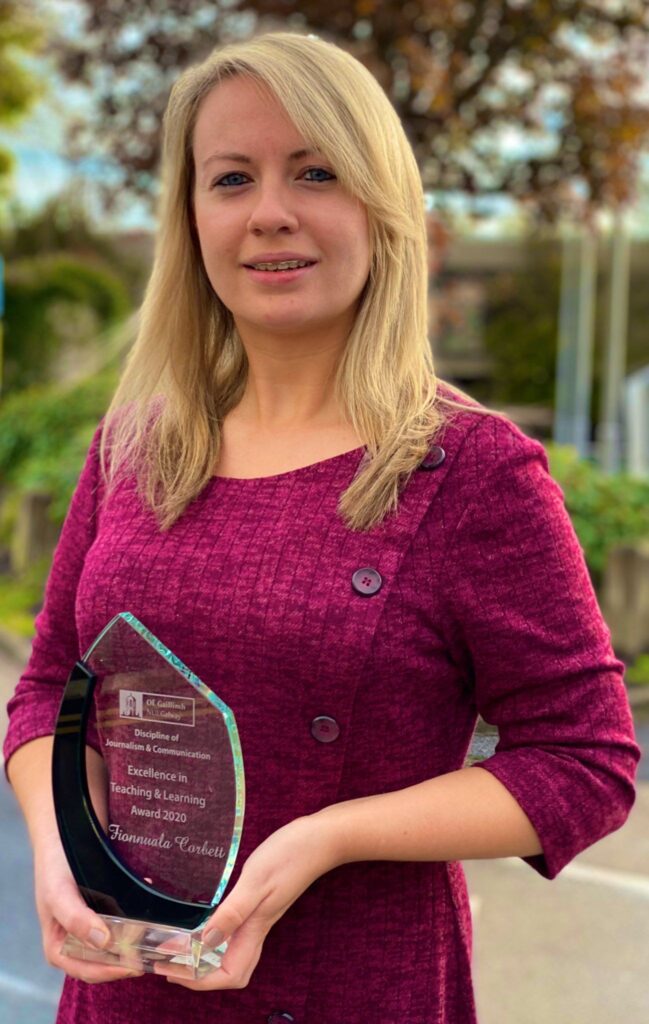 NUI Galway lecturer Fionnuala Corbett was successful at the recent IMRO Radio Awards, taking home silver in the News Broadcaster of the Year category in the event in early October.

The national IMRO Radio awards took place via Livestream, replacing the usual celebrations of a Gala Dinner in the Lyrath Estate in Kilkenny.

SIN spoke to Fionnuala Corbett, Head of News at iRadio and Journalism lecturer at NUI Galway, to get her reaction on winning Silver for News Broadcaster of the year. She also gives an insight into the journey that got her to this moment, which she confirmed was a highlight of her career so far.

Speaking with modesty, Fionnuala said she was ecstatic with the recognition, and that on the run up to the awards ceremony, she tried not to get ahead of herself, although some belief had slipped through.

“Last Friday, the nerves were building, I’m not going to lie. I did allow myself to think of how nice it would be to be recognised in some way.”

Complimentary of both the event organisers and the other nominees, Fionnuala gave a shout out to everyone who was nominated and also commended IMRO and the Broadcasting Authority of Ireland (BAI) for such a well-run and, mostly, technical glitch free event.

Not getting to go to the Gala was a shame for the IRadio presenter, but Fionnuala and those watching with her did not let that dampen their spirits:

“It was definitely strange. Normally you would get to head to Kilkenny, and you’d be getting very dressed up. You would be getting the hair and make-up done and you’d have a real night of it in the Lyrath Estate, but obviously we were all confined to our sitting rooms pretty much. I think everyone made the most of it.”

Fionnuala began her radio career early, getting her start in iRadio during her school years. A brief work placement gave her a taste for radio and from there, she went on to study Journalism and New Media in the University of Limerick.

Fiona McGarry, one of Fionnuala’s lectuers in Limerick had nothing but praise for Fionnuala, saying, “Right from her student days she showed great potential. It is fantastic now to see that this has been recognised by IMRO. It’s also great to see women in broadcasting being acknowledged. Fionnuala is a really great role model for young women going into the radio industry today.”

Going for any-and-every opportunity is key in Fionnuala’s mind if you want to pursue a career in the industry. Through her studies, she took on a six-month placement with iRadio and got to experience it all, from news to the promo team and she also got an insight into radio production. Fionnuala then travelled to Scotland where she did a short placement with Central FM.

Soon after that, she was offered a weekend news role with iRadio – all while still working on the final year of her degree. After a brief stint with Morning Ireland, Fionnuala took on a full-time news role with iRadio where she began as a contributor with Fergal D’Arcy. She has been with the station ever since.

Currently, Fionnuala is working with Dave Duke on their daily show ‘The Lift’ and is appreciative of the joy it brings both themselves and their listeners. “You get to have a lot of fun as well,” she says. “With the Lift, we do try and make people laugh, and we have a lot of fun day to day.”

Fionnuala could not help but give her colleague Dave Duke some well-earned praise for their show Éirevision, which also won a Bronze Specialist Music Show award at the IMROs, saying, “He is an absolutely fantastic colleague, he just couldn’t be better to work with.”

David for his part says the feeling is mutual, stating that, “Fionnuala is an absolute powerhouse of a broadcaster and I genuinely mean that. I can guarantee you that there is not another broadcaster in the country that works harder than Fionnuala Corbett.”

The secret to her success, Fionnuala maintains, is that it is all about dedication, commitment and having fun with it. Putting in the work and doing your research pays off and gives you a better opportunity to really enjoy your time on air. It seems that Fionnuala is exactly where she is supposed to be and is loving every moment she spends collaborating with her colleagues and speaking to her listeners.

“There is a real buzz that comes with getting to go on air and it’s a real privilege to get to go live every day and I do really appreciate that,” she finished.