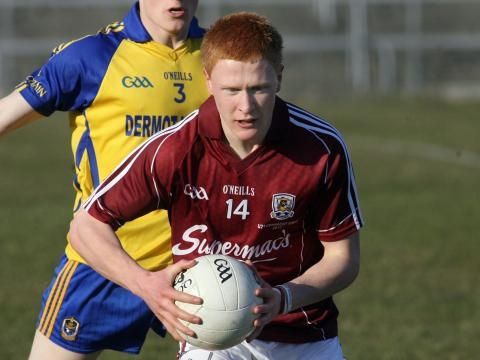 NUI Galway student Adrian Varley was captain of the Cortoon Shamrocks side which ensured that they would be playing Senior Championship football in 2021 after pipping Kilkerrin-Clonberne in the Intermediate Final.

Varley, who was co-captain of the club from the north of the county, was pivotal in his side’s victory to return to the Senior rankings following their drop down two years previous.  The flame-haired corner forward raised the white flag on four separate occasions in an engrossing affair which was competitive until the death.

The men in sky blue had it all to do after suffering a hammer blow early on, when household name Shane Walsh converted a penalty in the opening exchanges and Kilkerrin-Clonberne tagged on another score with no reply within the first five.

A brace of points from Varley, who was involved in the college’s Sigerson Cup panel last year, helped to drag Shamrocks back into the game.

While Cortoon were battling hard, their Kilkerrin-Clonberne counterparts were doing their utmost to keep them at arms’ length.

Not long into act two, all was about to change however.  Paul Varley (twin of Adrian), arrowed an excellent delivery into the square, where Joseph Donnellan displayed tremendous power to rise highest and fetch the ball, before unleashing a powerful strike which nestled behind Kilkerrin-Clonberne shot-stopper Fiachra Mac an Tsaoi to level proceedings.

Cortoon’s tails were up from then on and they smelled blood.  Adrian Varley bisected the posts twice again, before Shane Walsh, Conor Rabbitte and Johnny Ryan spearheading the charge for the men donned in red to leave the game on a knife edge as it entered the final furlong.

With the fixture in the melting pot, veteran David Warde edged the men from just off the N83 ahead in the dying echelons, before Peter Finnerty made a substitute’s dream performance, chipping in with a crucial score to secure the title.

Chaos ensued in injury time, with a high tackle from co-captain Varley seeing him banished to the line by the man in the middle Christopher Ryan for a scything challenge.  It wouldn’t be long before his own Brian Roache followed him as well as Chris Glynn, Kilkerrin-Clonberne’s captain, for the fracas which ensued.

Varley will care little, however, and it would be him as well as co-captain David Finnegan who would be hoisting the Cotter Cup above their heads and heading home with the title of Galway Intermediate kingpins for the third time in the club’s history.