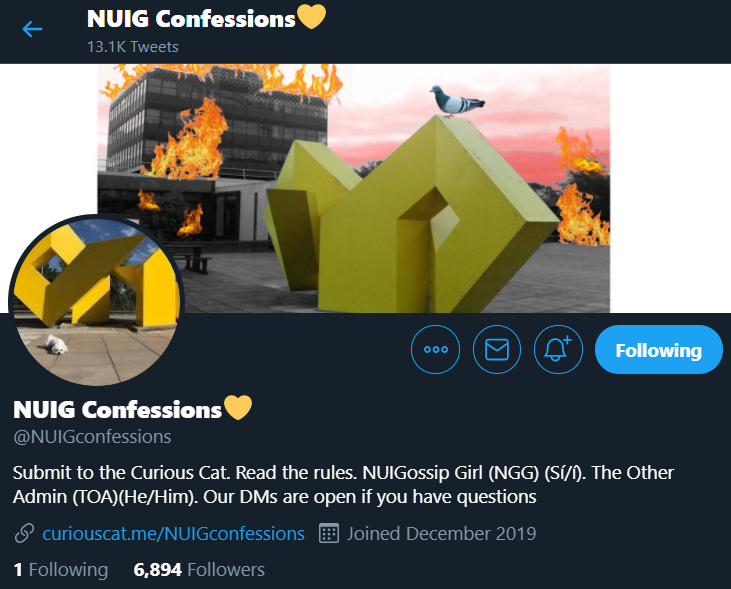 The account, run by anonymous duo, NUIG Gossip Girl and The Other Admin announced their charitable intentions last Saturday to coincide with World Mental Health Day.

The fundraiser smashed its initial goal of raising €500 for the local charity within just two hours and has since gone on to raise over €1,000 for the cause.

The account’s admins spoke to SIN about the charitable endeavour, which they had only devised the night prior:

“The idea genuinely came to us on Friday, no word of a lie we thought of it Friday night as something to do for world mental health day, and from there we looked into mental health services and charities around Galway and the west of Ireland and from there the SU told us about Helplink and how they were on of the charities the SU were working on fundraising for this year.” they said.

One half of the mysterious double act found that as the page grew in popularity students began to open up to them anonymously about their feelings of loneliness and general struggles with college life:

“When we set up this page we admittedly set it up as a place for people to confess love for their class mates, send in stories about embarrassing one night stands and the library romances students dream of, but pretty quickly we had students opening up to us about how lonely they felt in college, how hard things were for them and we couldn’t ignore it.

The Other Admin himself upened up about his own experiences with the mental health services available on campus and the important role Helplink played in his own life.

“When everything shut down in March, even myself (TOA), my mental health was in the gutter, I tried accessing the mental health supports the college have in place but we all know that NUIG has room for improvement there. So, it was services like HelpLink that helped me get through a rough few months.”

The uncertainty that comes with the current health crisis has taken its toll on students and the accounts’ admins said that being able to make a difference through Their twitter account has been “incredible” to them.

“With so much uncertainty around what’s happening with the year ahead for everyone, there’s so much unnecessary stress on student’s lives, but apart from that, we’re just missing out on so many opportunities to do anything, societies, Sports clubs, SU events all having to cancel or go all online has made it so hard for people to have meaningful experiences and make meaningful connections and friendships.”, they said.

“We’ve realised that there is sort of a little community around this page, we’ve had people tell us how much it helps them in keeping track of what’s going on around NUIG, Galway and even Ireland when it comes to the world we live in at the moment so the fact the we can change even one person’s mood is enough, but being able to actually have major impacts on student life and do things like this fundraiser is incredible to us” they continued.

Helplink, expressed their gratitude towards all those who donated, telling SIN they were “bowled over” by the support.

“Helplink Mental Health, Galway’s only mental health charity that provides counselling and other mental health services 7 day a week are absolutely bowled over by the generosity of students from NUIG that have been donating to a GoFundMe page set up by @NUIGConfessions.”

“NUIG Confessions set up the fund on World Mental Health Day and it has been exceeding targets ever since! Helplink is one of three charities chosen this year by NUIG SU for support on charity events throughout the academic year. They provide accessible free or low-cost mental health services to children, young people and adults alike.”

Helplink CEO Lochlann Scott also spoke of his appreciation for the generosity of students who donated; “we are very humbled and appreciative of the students that are supporting our work. Helplink has strong ties with NUIG and we are delighted that we are receiving such support”.

As far as other charitable endeavours go in the future the admins of the 6,000-follower strong account haven’t ruled out further good work, and have committed to supporting future support work by the SU over the course of the year.

“We haven’t talked about doing anything concrete in the future yet but we know the SU have big plans cooking for fundraising and we’ll obviously be supporting them there in their efforts but after the success of this fundraiser, we’d be kind of insane to not try and do more.” they said.