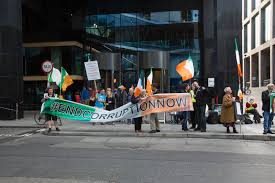 Ireland is known for being a welcoming country full of friendly people whose roots extend all over the world, but do we tend to turn a blind eye to harmful far-right advocacy on our own soil?

It is easy to disregard the bigoted content we sometimes see on social media because we’re always told “it comes from a pathetic troll who’s harmless, really they’re only looking for attention and you should ignore them.”

However, there is a person behind those disgusting comments who is capable of inflicting serious damage beyond our timelines. We have all seen and condemned plenty of examples of far-right activism on the global scale; you only need to glance at the US and you’ll find a plethora of examples from white supremacist marches, to the racist views and policies of a president who is still venerated by many American people.

Closer to home we can see how right-wing politics is gaining traction in Poland and the UK.

The ruling Law and Justice party in Poland increased its vote share in their October elections with its ultra ‘traditional Christian’ values, and we all saw how Brexit was voted in on a xenophobic misinformation campaign. It is easy to say that we’ll never be like that, because the Irish people are too sensible, and we know better. However, this is a dangerous assumption to take for granted.

At the General Election in February, there was a clear increase in far-right candidates putting themselves forward, who saw an opportunity owing to the increase in right-wing populism in Europe. They didn’t have much luck in those elections however, but they might be more fortunate next time.

Racist attacks are on the rise in Ireland. According to figures released by the Irish Network Against Racism (INAR), the number of racist incidents reported in the first three months of 2020 were double what they were in the same period of last year.

This could be because the perpetrators of these incidents are growing in numbers and those responsible feel more confident harassing people in public, or perhaps the victims of these crimes are now reporting them more often. It’s likely that it’s a combination of the two.

Over the summer it seemed that every week there was a new video of someone being verbally or physically assaulted by racist white Irish people. One such incident was captured on our own college campus.  Some of them were old, some of them were young. This is clearly a widespread problem throughout Irish society that needs to be addressed.

In June, a Europol report stated that ‘violent right-wing extremism’ is growing in Ireland. This is very concerning. This violence is being fuelled by racist and Islamophobic attitudes spread online by so called ‘Irish patriots’.

We have all seen these ridiculous accounts online that do not represent the majority of Irish people. We are told not engage with them and move on, but we shouldn’t just pretend they don’t exist because the people behind these accounts are part of a growing movement.

We have all seen how they have used the pandemic to exploit genuine fears in our communities, spreading misinformation among frightened people creating widespread panic and anger.

Most people were furious at the anti-mask protests we have seen in Dublin throughout the pandemic, with little to no social distancing in sight at such events.

Anybody who has lost someone to Covid-19, or been infected by it themselves, would be appalled by it. These protests are a consequence of the rise of the far-right in Ireland. They are spearheaded by activists like Gemma O’Doherty and John Waters who have tried use this pandemic to further their own political agendas.

We have to do better and realise that the ‘noisy few’ have the potential to become violent and shouldn’t just be ignored. White supremacy and xenophobia should have no place in Irish society so we cannot allow the far-right movement to gain any more traction in this country.