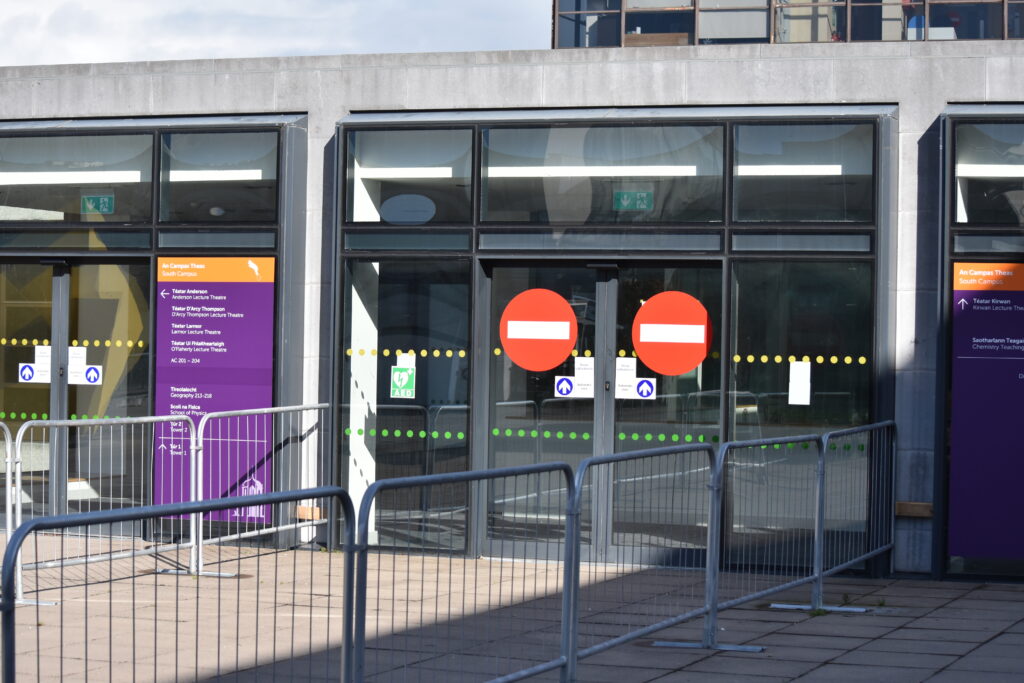 By Paddy Henry and Oisín Bradley

NUI Galway will be ceasing all on-campus lectures for the duration of Semester One.

The information, circulated by the University via an email on Tuesday afternoon, detailed that all lectures scheduled to take place in the University before Christmas with the exception of Research facilities and practical lab based tutorials.

“Considering that current national restrictions (at Level 3 at least) will be now in place until (at least) week 5 in the semester and sensing the need for as much certainty and stability as possible in this regard, for the remainder of this semester, all other teaching and learning will remain online,” the college revealed.

The announcement also detailed that only essential on-site activities would be taking place for the remainder of the Semester, including research facilities and lab-based practical tuition for which it is essential to have an on-campus setting.

The news comes on the back of the announcement from the Government on Monday evening that the entire country would be moving to Level Three regulations in the country’s plan for living with Covid-19.

The University had been operating under these restrictions for the duration of Week One and Week Two of the academic year.  However, with cases in the region, as well as the nation as a whole rising sharply, the University has decided to make this decision in order to keep its staff and students safe.

The James Hardiman library is to remain open under the restrictions outlined at present, while the University are also said to be exploring the idea of safe spaces where students can congregate in a risk-free setting.

Speaking to SIN, Student’s Union Welfare and Equality Officer Róisín NicLochlainn welcomed this announcement, but encouraged other off-campus complexes to follow in their footsteps

“Campus Living are offering refunds for Semester One, and we welcome that from the on campus accommodation but we need other residences around the city to follow suit on that.”

“What we really need to see now is accommodation providers around the city show a bit of human compassion and empathy around the situation that students have been put in, beyond their own control and refund students in full for the accommodation this semester.” she said.

NicLochlainn slammed the University for what she described as a ‘last-minute’ response, highlighting the problems this has brought for International Students in particular.

“I have been bombarded with queries, International students especially are very angry, and rightly so. They have been asking me why they have been called from halfway around the world to come here for NUIG to finally say at the last minute that it’s all online.”

She also called into question how the University can justifiably charge the student levy in its entirety given the lack of services available on campus, owing to the pandemic, calling for a reduction in the cost of the levy.

“I would call into question how charging the student levy could be justified,” she said.

“I cant see how the university can now justify charging for services such as the student levy when all of the services within the levy either won’t be of use or will be online which will obviously be of reduced quality.”

“If it is online and the least the University can do is reduce the fees for things like clubs and societies and the kingfisher, theyre not going to be of use now and should at the very least be reduced,” she continued.