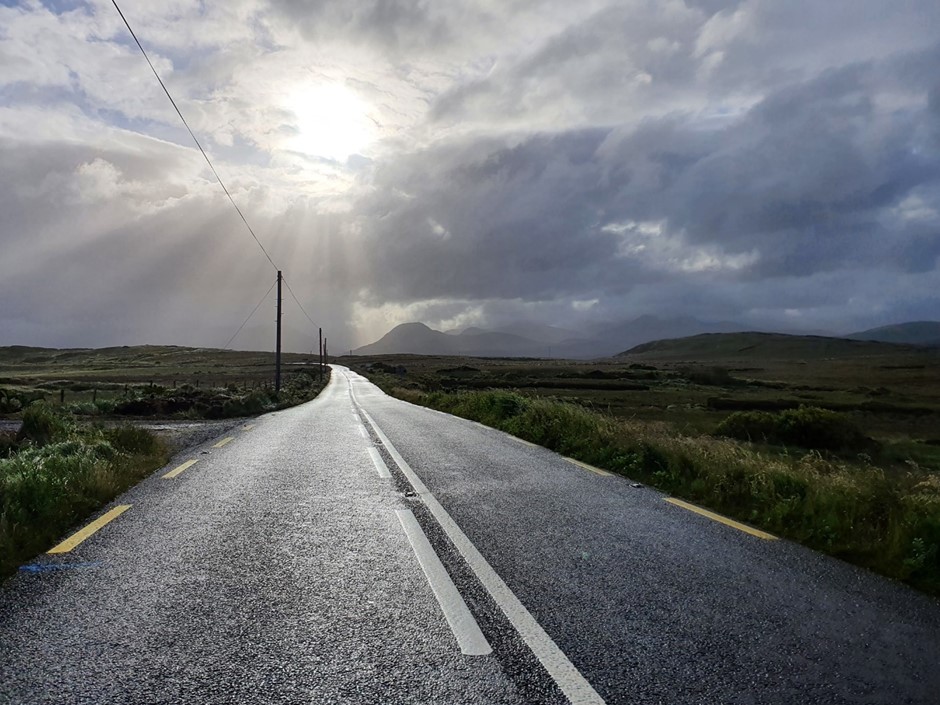 “It is not the critic who counts. Not the man who points out how the strong man stumbles or where the doer of deeds could have done them better. The credit belongs to the man who is actually in the arena, whose face is marred by dust and sweat and blood, who strives valiantly, who errs, who comes short again and again, because there is no effort without error and shortcoming; but who does actually strive to do the deeds, who knows great enthusiasms, the great devotions, who spends himself in a worthy cause, who at best knows in the end the triumph of high achievement, and who at the worst, if he fails, at least fails while daring greatly, so that his place shall never be with those cold and timid souls who neither know victory nor defeat” – Theodore Roosevelt

Back in the dying embers of a surreal summer, an unusually crisp and clear Clifden morning saw the 2020 edition of Connemara 100 begin. I was one of the 51 competitors, a record number of entrants who undertook the challenge. 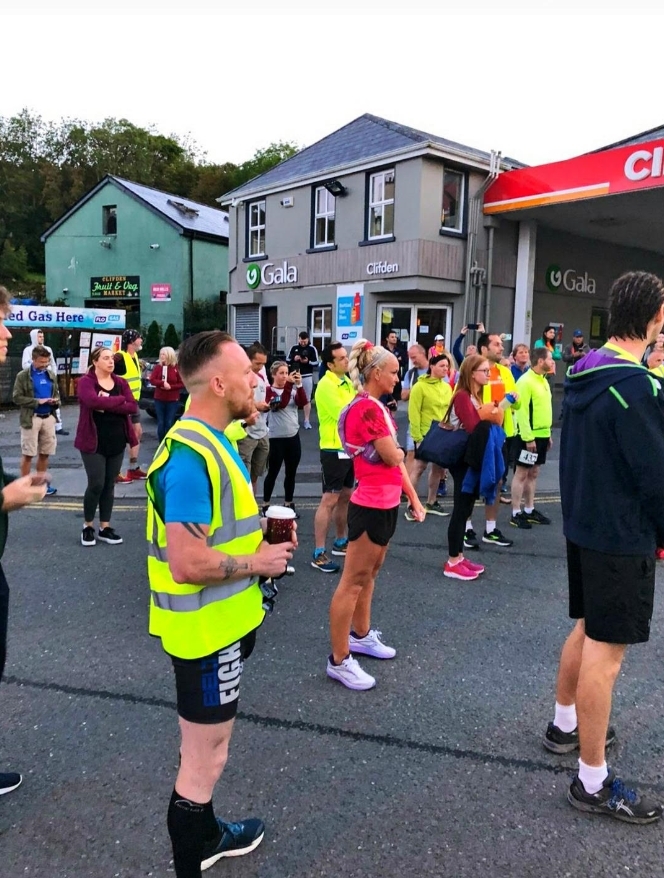 At the dawn of 2020, the intention was to run a 40-mile race and a 50-mile ultra in May before gradually progressing towards a 100-miler next year. A dangerous and virulent virus selfishly upended my personal athletic plans. I could now empathise with Carl Froch that time when the volcanic ash cloud disrupted his pugilistic plans. As the sobering reality of lockdown took shape, I sought a new target, a fresh challenge, something to get me out of bed at 6am and run for two hours in the rain and wind. Cancelled races fell like dominos. All that was left was the Connemara 100, Ireland’s toughest road race.

My immediate goals were to consistently increase my weekly mileage and improve my running economy. As a long-time fan of weight training and plyometrics I often felt my running style was too stiff and lacked efficiency. Most running coaches recommended regular sprint training alongside the long- haul slow mileage endurance work. The simple fact of the human body in general is that when it is challenged it will respond with growth. It will become more efficient, faster, and sharper. And so it proved. I became faster and my running economy improved leaps and bounds. I mixed 30km runs with track sessions on the track. I ran every day, sometimes at 6am and often between 4 and 7pm. I wanted it. I wanted to complete 100 miles in one day. I wanted to know could it be done and if so, what would it feel like afterwards.

Why run 100 miles? Why do anything? Why scoff a pizza and watch Home and Away? Why smoke a cigarette when you know it will give you cancer? Why ask another person why they do anything?

Knowing your why however is vital when undertaking endurance challenges. The supercomputer between our ears always veers towards avoidance of struggle and difficulty. And the computer’s signals are amplified after 50 miles of running and 30 degrees heat.

Because the human body is more than capable of doing so. We as a species possess all the physiological hardware required to cover vast distances over a short period of time. We are nomads at heart, exploratory intelligent primates who like to roam and hunt and seek new territories not sat peering into a laptop getting psychologically triggered by devious tech platforms.

Because I want to test myself. Because I want to apply myself to a difficult and meaningful task that will bring the very best out of me. I want to observe my mind, how it reacts in times of adversity. I want to study my mind, its weaknesses, its pretences, its tricks and ticks. And in this live psychological autopsy the aim is to apply the knowledge gained to apply in other areas of life. To become a better human.

This will be a serious test of my mental and physical resilience. I want to see can I pass the examination.

A sub 1.30 half marathon personal best kicked off May’s training followed by a first ever track marathon around the track in Westside Playing Fields. I remember almost packing it in after 33km as the rain started to fall. Building your mental toughness is vital for ultra-running and the only way to do so is to place yourself in such positions where your mind is screaming at you to stop but you consciously opt to control the narrative, re-calibrate the internal voice, changing it from automatic to self-directed.  Much evidence exists of exercise changing the shape of the human brain. I can attest to it. The training of the body must be the primary foundation before the mind can then be retrained.

I used to smoke 30 cigarettes a day.  Now I can run 90 miles a week.  The transformation involved serious physical and mental rewiring.  I enjoy that process.  The journey continues.  It is not the pursuit of happiness.  Happiness is the pursuit.  In the striving for mastery peace can be discovered.

By placing yourself willingly in adverse physical situations you are in effect challenging your brain and recalibrating what it thinks you are capable of.

Preparing for Connemara 100 served a timely reminder of the limits my own mind was placing on my concept of potential.

By mid-June I was cranking out 80 to 90 miles per week. I would run a marathon on a Sunday after already running a 100km in the previous 4 days. Monday evening, I was out on the road again. I went for the time on my feet approach. I ran fatigued, I ran when I did not want to. I keep churning out the miles. On any given week you could spot me on the motorway coming in from Oranmore or chugging along the Prom in the lashing rain. I refused to allow weather conditions to impede on what had to be done.

My final heavy week involved a seven-day, 100-mile training block which began at 6am on a horrendous morning of hailstones in Connemara and finished sprinting up the hills and trails around the Algarve town of Lagos. Returning home to taper and self-isolate I began to relish the challenge now which was so tantalisingly close.

A year ago, I was eliminated on day three of Ultimate Hell Week, the RTÉ television show where civilians take on the Irish Army Ranger selection course. The performance haunted me for months. I approached Connemara 100 as a shot at redemption.

It was a sumptuous crystal-clear day when 51 brave athletes jogged out of Clifden. Ultrarunning is about troubleshooting problems as much as the actual running and on the day, luck blessed myself and my team. Between mile 40 at Maam Cross and mile 56 at Leenane the demons screamed loudest as the heat exceeded 30 degrees. I had the impression at one stage of the mountains mocking me. How dare you come here and disrespect this sacred ground.

Leaving Leenane at 7pm, hobbling, it looked like a tall order. 44 miles to go with the legs seized, dehydrated, sunburnt, limping out of the town where the Bull McCabe sank pints. Hobbling, damaged, limping but still moving forward.

The camaraderie amongst the fellow runners is what keeps you going. These events have a magical and reality shifting psychedelic quality. They offer an experience that distils the very best of human beings in their purest form. We are running from one point to another and we are willing to endure pain and suffering to do so. We want to overcome. We want to achieve. We want to accomplish. We want something to make us smile if we’re lucky enough to reach old age. We want to sip whiskey on a rocking chair while looking back on a life with some big proud shiny moments that mix with the whiskey to warm the soul.

Running back down the Inagh Valley 62 miles in and surfing off a second wind as the heat died down, I felt a warm glow of satisfaction that money cannot buy. Its very difficult to describe the spiritual effects of participating in these events, they offer a corridor into a higher plain of consciousness.

We headed into the night renewed and refocused. But just when you think you have dispelled the demons they will return; one of many life lessons packed into an ultra-event. Before turning off towards Roundstone you are greeted with an impossibly cruel sign stating Clifden 15km.

I cursed the race director “Why didn’t he just leave it at 80 miles!”

The night crawled in and we marched on to Roundstone, alternating between walking and running fuelled by Tailwind, Nurofen, and thoughts of the finish line.

Leaving Roundstone, Clannad’s ‘Newgrange’ oozed from the car stereo as I plodded on. We allowed our minds to wander alongside the music. I thought of the millions of Irish people who lived and died, the pain and suffering that haunted these lands during the famine.

The poverty, the poetry, the misery, the ghosts of our past seemed to rise from the dark fields around us as we ploughed on deep into the night.

Spotting the lights of a crew car ahead my chief crew member remarked.

Reaching Clifden at 5am, relief washed over me in repeated waves. A final hilariously cruel twist means a runner must lap the town 3 times before crossing the finish line.

By then I had mentally checked out and ended up losing 4 places. This is something I aim to fix next year.

I was neither elated nor emotional.

I expected to finish. My training had brought me here, I knew the work I had put in. I knew what I had done in the three months prior. The experiences and emotions shared along the way with people from all walks of life provides the fuel to keep you going when times get hard. Another valuable lesson learned in the crucible of endurance. The man in the arena. That old Roosevelt quote. The credit belongs to the man in the arena.

Hard times, negative thoughts, and challenging situations are a revolving and relentless fact of the human condition.

This race was a reminder of the deep reserves of resilience, respect, and empathy we all possess when we strip away much of the unnecessary and destructive elements of modern life.

I was one the of lucky 39 who finished the race in conditions more suited to California than Clifden.

A sub 24-hour finish and memories that will last a lifetime. Moments engraved in my brain triggering new fresh narratives pulsating with hope and anticipation.

All for less than a hundred quid.

Shout out to all those lovely people who were a part of the journey.