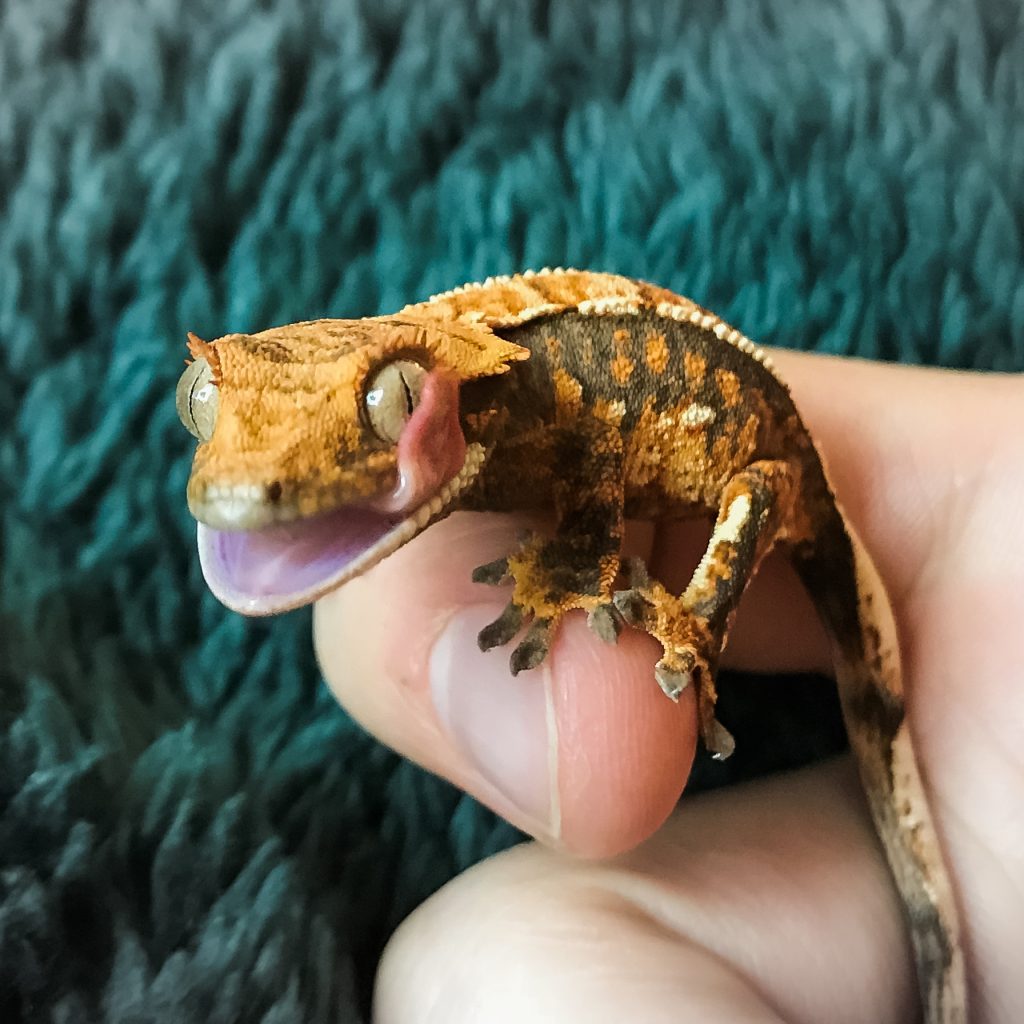 With no evidence yet that they can transmit the Coronavirus, and with many of us in need of some new company to survive quarantine, getting a new pet has never been a better idea! NUI Galway student Christopher Okeke, who studies Arts with Philosophy and Spanish, talked to SIN about some of the less conventional options.

The two species of geckos which Chris tends to are the crested and morning geckos! The crested gecko is native to southern New Caledonia. The species was considered extinct until it was rediscovered in 1994. The crested gecko is one of the most widely kept and bred gecko in the world. Chris commented that the species require a special diet which consists of fruits and insects. They should not be overfed! The size of a crested gecko is about 8 inches in length, and they can live for up to 15-20 years, which is a huge commitment.

The mourning gecko, also known as the Lepidodactylus lugubris, is also a species that Chris tends to in his home. These little guys are also widely kept as pets and are easy to maintain. The species measure up to 10cm, with a matching lifespan of 10 years. They feed on insects and nectar and do not require any heating lamp since, as Chris commented, the crested and mourning geckos are “comfortable in room temperature”. This species are quite interesting, since they are one of the few species that do not require a male to reproduce, meaning that most of the mourning geckos are female and when they create an egg, it is almost a perfect copy of them. How fun is that?

Little fun facts about mourning geckos include that whenever a new egg hatches you can hear them communicate through little clicks. As well as this, geckos are very social with each other. Keep in mind that you must have enough food and hiding spaces provided for your geckos to avoid the bigger ones bullying the babies. So, follow the advice and feed your little critters and give them plenty of hiding spots! Geckos do not enjoy being handled, but do enjoy watching over the actions of their owners, which is very sweet.

To most, keeping a giant spider as a pet would not cross their mind, but Chris finds that tarantulas are charming companions and is not afraid to handle them. When asking Chris about the personality of the tarantulas, he stated that, “if you make your presence known to them when entering the enclosure, they won’t really care, but if you suddenly barge in they might flick a few hairs and get a little bit aggressive”. Many hearing this might be frightened to purchase them as a pet, however, according to exotic vet Debbie H, a tarantula bite is no more painful than a bee sting. A Tarantula will live up to 20 years in captivity which is also longer than most marriages. Just feed your little guy some crickets and other yummy insects and you should be in their good graces!

This species is native to West and Central Africa, and it is not endangered as it is a popular pet amongst snake lovers! The ball python is not venomous and seem to make great pets. However, a fun fact is that a ball python gets its name from its nervous habit of rolling into a ball. Isn’t that adorable? Their maximum length is about 3 to 5 feet and they have a lifespan of 30 years! Chris described his ball python pal as “chill” and he also happens to be one of the few pets that Chris handles daily. He lives on a diet of dead rats or mice. Chris warns people who are thinking about owning a ball python to not panic when they refuse to eat, since it is a normal process for the snakes to go on a hunger strike.

The creepy crawly. Centipedes do not sound like a very friendly pet to have and many would turn away from adopting something so frightening as a companion. However, animal lovers like Chris love a challenge. The weirder the pet, the better! The centipede eats once a week and their diet consists of small insects that are soft, which include spiders, worms etc. A centipede can live up to 5-6 years and they do not enjoy being handled, depending on their personality.

Something Chris strongly encourages is that you explore the bite reports, since it is very important to be aware of the risks of being bitten by some exotic insects. “As long as you feed them, you should have no issues”, says Chris.

While many assume that keeping such pets might be a difficult blow financially, they would be wrong. The enclosures would cost you anywhere between €20-50 and if you buy the food in bulk, as Chris suggests, it often comes out cheaper. Both species of geckos mentioned are happy to live in room temperature, which means you do not need to buy a heating lamp. Although, if you want to own a ball python, they require a little extra heat in their tank. You can buy a little heater for the tank and place it on one side and make sure to keep a cool side, so that the snake can shift between temperatures depending on the season and room temperature.

Advice from the Reptile dad

Further advice from our reptile loving Chris is that you should, “do your research on the specific reptiles you are interested in and make sure to read bite reports! Some bites can be dangerous if not treated. Understand the care products and temperaments of the animals. Research other species to branch out, illnesses they’re prone to, and what reptile would best suit your lifestyle. Should you get a low maintenance reptile or one who enjoys the company of its owner and enjoys being handled?”

Also, it is important to note that: “You must understand that you can’t go to regular vets because that’s not their jurisdiction. They are mainly used to cats and dogs, so you need to put effort into researching care info and health risks”.