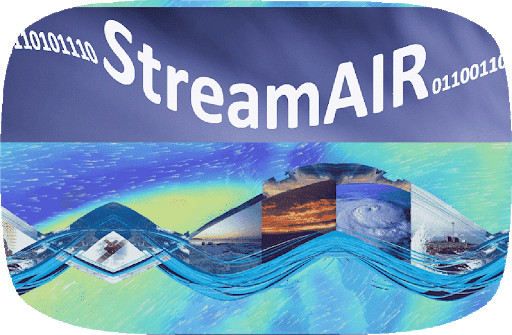 StreamAIR is set to shine a light on the key drivers of climate change and air pollution, and build on its internationally-recognised Mace Head Atmospheric Research station. The centre, which is based in Connemara, is one of the most important facilities for atmospheric composition observations globally and has been operating since as far back as 1958.

Mace Head is a member of numerous regional to global networks, contributing data and analysis to a wide range of atmospheric problems. In particular, it is a World Meteorological Organisation (WMO) Global Atmosphere Watch (GAW) atmospheric composition and climate research station, and a European Monitoring and Evaluation Programme (EMEP) supersite, with the aim of solving transboundary air pollution problems under the United Nations Convention on Long-Range Transboundary Air Pollution (CLRTAP).

The facility has generated some of the most important long-term observation datasets of greenhouse gases (GHGs), such has carbon dioxide, methane, and ozone, and ozone depleting substances such as CFCs, along with Particulate Matter (PM), such as sulphate haze producing acid rain.

Speaking on the back of the development of this new app, Executive Dean of Science and Engineering at NUI Galway, Professor Walter Gear, said that the new app will help increase awareness of the implications of air pollution, stating: “We are very proud of the work we do here and its contribution to European health and to informing measures to protect our planet.  We are now adding this new app, StreamAIR, that will help to raise further awareness about air pollution and climate issues and their implications”.

Through StreamAIR, NUI Galway and Mace Head can provide current real-time data to a range of agencies and networks, fusing together real time observations and forecast date on multiple platforms, including mobile devices.

Principal Researcher on the project, which was funded by the Science Foundation of Ireland’s MaREI Energy, Climate and Marine research centre, Dr Liz Coleman, said that the app has the potential to identify the sources of air pollution, as well as the toxicity level of air pollution episodes. This information can be combined with exposure data to better inform the public of the potential risks from a national level to a European scale, enabling users to protect their health by taking necessary precautions when a pollution event is forecasted on the app.

Director of the Mace Head Centre, Dr Colin O’Dowd, spoke of how the development of this new app helps bring the fight against climate change into everybody’s hands, commenting; “The StreamAIR app brings the polluting agents and global warming agents together into the palm of everybody’s hand, emphasising that both types of agents must be reduced through co-benefit observations, research, and policy development”.