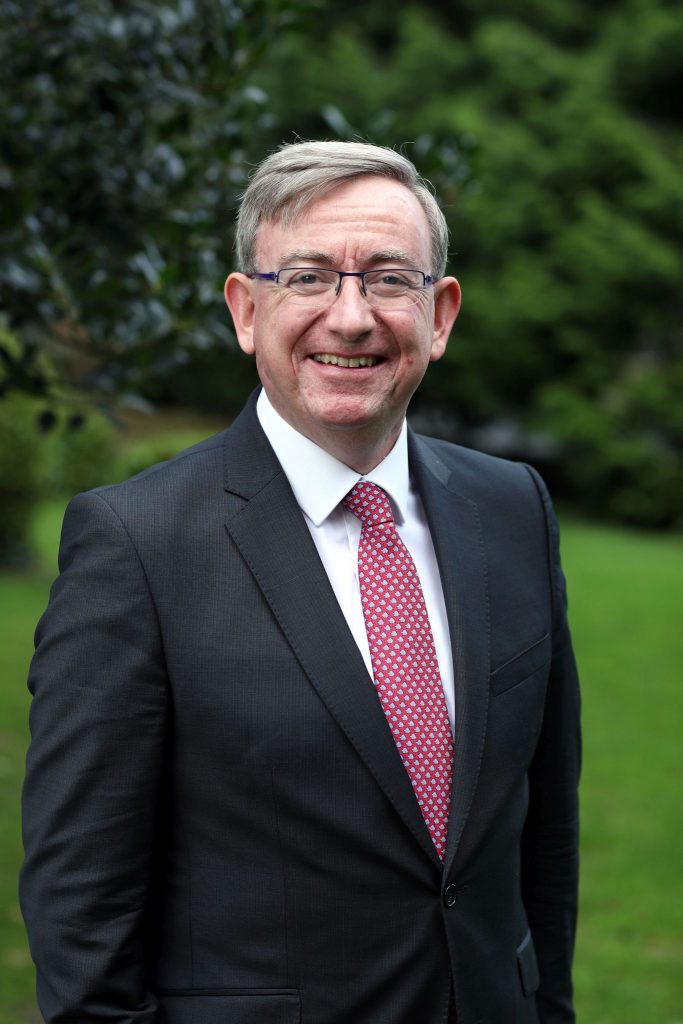 On the rent increase in student accommodation:

Professor Ó hÓgartaigh has voiced his opposition to the decision made by the board of Atalia Student Residences to increase the price of rent by 4% in on-campus accommodation and has begun the process of reviewing that decision in full. The University’s five-year strategy for 2020-2025, published before Christmas, commits to “additional affordable and sustainable on-campus accommodation for our students”, which many feel has been disregarded completely by Atalia’s decision. The University owns 100% of the company Atalia Student Residences, and the Bursar and Chief Operational Officer (COO) of NUI Galway sit on the board which made this decision. Ciarán Ó hÓgartaigh refuses to exercise some sort of executive authority to overrule the board’s decision himself, instead advocating for due process involving the University, Údarás na hOllscoile (the University’s governing authority), and Atalia Student Residences. “There are various processes in the University that we need to work through in order to come to a conclusion, so Atalia is not the only piece because they’re also looking to the University for some decision-making”. He continued, “There are governance processes that we need to go through. The board made the decision given the information they had at the time and in good faith, so we’re thinking now that there may be other information that either has changed since then or the University can give a different perspective”.

Explaining one of the reasons behind the decision to raise rent prices, Professor Ó hÓgartaigh stated, “(The board is) keen that we build more accommodation for students. If we don’t have a proper financing structure for accommodation, we won’t be able to build more accommodation”. He outlines that the University must strike a balance between building and offering more luxurious accommodation, which would be more expensive, and more basic accommodation, which would be cheaper. When put to him that perhaps the difference in the cost of building shouldn’t be covered by raising the price of rent for students, but by the University itself, the President says that is one of the possibilities being looked at by the decision-makers. “That’s one of the things we’re looking at and that’s potentially why it has to go through a longer process, particularly for phase 2, because there is potential for the University to fund. But that’s obviously a much bigger decision, that’s not there for me to make, but there are various committees, finance and otherwise. The other side of that is if the university funds accommodation, since we’ve limited resources, what else can we not fund?” He continued, “But it’s a very fair question because one of the concerns for Atalia and the University is if we take out loans (to build), we need to pay those loans back. But (we’re trying to see) if the University can in some way self-invest, or find other ways to finance. Another option discussed briefly was if government and public policy is so concerned about student accommodation, why wouldn’t governments provide money for student accommodation? This was also mentioned by the Students’ Union, who are campaigning for that. If the government are planning to do that for public housing, why would it not put money aside for student accommodation? Universities, I think it’s widely accepted, are underfunded, so how we fund facilities like that, while maintaining excellence in teaching and research is a balance. We don’t have infinite resources, so that’s the kind of priorities we have to make. The strategy, the idea that we’re there for students and for the public good frames those kinds of priorities”. The President also acknowledged that the decision-making process did not include enough student input, and has committed to involving students more in these decisions in the future. “One thing we’ve learned from this is that students need to be involved to a greater extent. Engagement with me is, I hope, open and across the University, we’re keen that the students’ voices are heard, which they are to a certain extent now, but formalising a lot of that is going to be important”.

On the new era of the Galway University Foundation:

Just before Christmas, as reported by SIN, a report on the Galway University Foundation, submitted to the Charities Regulatory Authority by Inspector Tom Murray, found that the use of charity funds for 5-star hotels, business class flights, and lengthy taxi journeys between 2015-2017 were inconsistent with policies. It also found that the charity was, more generally, a well-run organisation. The aim of the charity is to raise funds for University and advance education. Most of the discrepancies found were down to the actions of Dr James Browne, Professor Ó hÓgartaigh’s predecessor, who was also Director of the charity at the time. Ciarán Ó hÓgartaigh is an ex oficio member of the new board of the Galway University Foundation, which met for the first time in January of this year. Prof. Ó hÓgartaigh explained how the charity has moved away from old practices, and will ensure inconsistencies like the aforementioned don’t happen again. “There are a number of practices and policies that were in place that are no longer in place. We’re looking at bringing the Foundation closer to the University, certainly that any such activities would take place in the University rather than the Foundation, so the expenditures, for example, travel, they always take place in the University, not in the Foundation, and under University policy”. He added, “Also the relationship between the University and the Foundation being much, much closer. An important point to make here is that these changes weren’t even because of the findings of the regulator’s report. This is something we’ve planned. I had said from the beginning that the Foundation is now closer to the University than it might have been in the past”.

The NUI Galway President’s salary is set by the Department of Education and Skills, and is currently set at €197,211. This is almost €7,500 higher than it was in the last year of Dr Browne’s presidency, which was just three years ago (€189,732 in 2016/17). Leo Varadkar waived his own pay increase last September as Taoiseach, and so is still earning €185,350 yearly. This is over €11,000 less than Professor Ó hÓgartaigh’s salary. The national minimum wage in Ireland, on a yearly basis, adds up to €19,874. The salary of the NUI Galway President is almost 10 times this amount. When asked to justify this salary, Professor Ó hÓgartaigh had this to say, “I accept (the salary) is very generous, and I’m very grateful for it, but I don’t set that salary, and I think people will know that I’m not doing the job for the money by any stretch. I’d still do it for a lower salary, but I don’t set the salary. He added, “When I say I’m grateful for it, it doesn’t mean ‘aw, thank you very much’, it actually means that I understand the profound responsibility I therefore have, given the leadership position that I hold and others hold in the University. That the salary does carry with it a responsibility, and being grateful for it, is something I hope comes across as being humble rather than ‘thank you very much’. I’m an accountant by background. There are other careers I could have pursued, so I’m not here for the money. I’m here because I have, since I started, way back at the age of 26, I came back into academic life having been an accountant because I have a very curious mind still, but secondly that sense, which has grown over time, of commitment to students and students’ wellbeing and I hope that our students find that, that that’s a hallmark of NUI Galway”.

On gender equality in NUI Galway:

NUI Galway, as of 2018, was still setting aside €240,000 for gender discrimination payments, reportedly arising from past cases of discrimination against female lecturers. Professor Ó hÓgartaigh explained that the progress they’ve made must continue. “I’ve always said two things on gender equality, one is that it’s work as yet unfinished, so I think NUI Galway, as with many other institutions, have a lot of work to do in that area. We’ve made great progress as a University community and I think the leadership of Anne Scott and also the voices of people in the organisation have really made a difference and I think we should value those voices because that’s been really important. The second thing I’ve said is that it’s the responsibility of us all. I think very often we feel that gender equality, or equality more generally, is someone else’s problem, when in fact it’s my responsibility, but it’s also the responsibility of the University community more generally to make sure that there is more diversity and equality within the University. And a third thing on it; to me, it’s a strength. The idea that we have diverse voices, that we recognise all the talents, I think makes the University a better place. Universities, by their nature, should have different voices, and sometimes dissident voices, I think sometimes to disagree is the nature of University. Debate is a good thing, and all of that is captured in those ideas around equality that we should effectively value all the talents that we have, and if we do, by its nature, there will be gender equality”. This, he says, is a big part of the new five-year strategy. “In the strategy, we’ve really focused on diversity as a strength and that openness. We used the word openness. We thought about words like inclusive and accessibility, and we thought sometimes they have narrow connotations, where openness means a lot of things, it means open to different voices, open as in transparent and honest, and open doors and gates in and out. That captures the essence, and diversity and equality and inclusivity being part of that is very important for what it is for NUI Galway”.

On not losing touch with students as President:

Professor Ó hÓgartaigh is adamant that he is here for students as NUI Galway President, and is here to execute his role in line with the University’s purpose of being here for the public good. He is also keen to encourage dialogue with students. “I took this job because coming back to my Alma Mater is really important to me, to help this University and its purpose to be here for its students. I teach, not a lot, but I teach. I try and meet students when I can, and I’m quite open to having dialogue with students. Rest assured that, even though sometimes it’s a journey and institutions have different views of the world and people in them, as President, I’m here because I’m committed to the idea of the University as being here for its students. So, if students want to get in contact with me, there’s president@nuigalway.ie. If I walk the campus, I’ve often said, stop and say hello. I don’t want to be stuck in the Quad. We said in the strategy, we’re here for the public good, but the one I was particularly keen on is that we’re here for our students as the first one. Society and planet afterwards, but here for our students, that’s something I think which is a very personal commitment, if you like, that I think, as a university, I’d like to deepen and entrench. It sometimes is a journey, so it doesn’t happen overnight, and I hope in the context of decisions made that people will have faith in that, because it is a journey”.