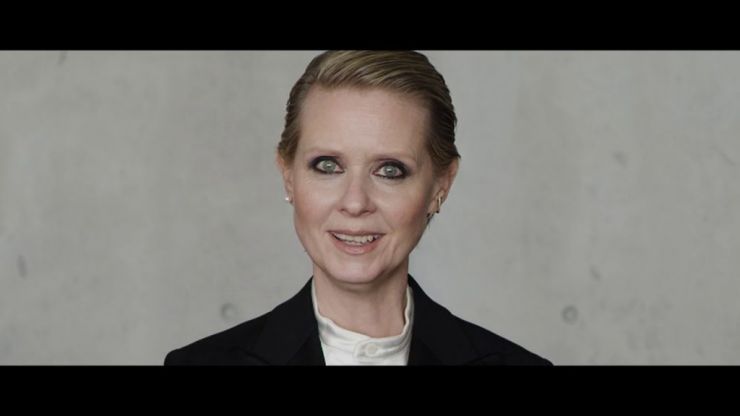 “Look sexy. Look hot. Don’t be so provocative! You’re asking for it. Wear black. Wear heels. You look like you’ve let yourself go!”

The cycle of contradiction and criticism that rings so familiar to many female ears continues as Cynthia Nixon stares challengingly at her viewer, eyes hard with either disgust for them, or the words she addresses them with. Claire Rothstein’s fashion film ‘Be A Lady, They Said’ is less than three minutes long, yet it packs a powerful punch, with Nixon’s recital of Camille Rainville’s 2017 poem being spliced with rapid images of models and actresses posing for paparazzi and fashion shoots. Their smooth visages, plumped lips and contorted bodies, innocuous at any fashion shoot or red-carpet event, take on a tone of menace as the upbeat, 1980’s style montage rapidly begins to include gruesome footage of the extraordinary lengths these women go in achieving what it supposedly means to be a ‘lady’. Body hair removal, bleaching, cosmetic surgery, dieting – anything to be smaller, smoother, more appealing. As Rothstein herself explained to The Guardian, the intention of the piece was to ‘flip the male gaze’, but really the piece is more of a parody of it, showing what was once conventional thought for one generation – ‘Fold his clothes, cook his dinner, that’s a woman’s job’ – as farcical to the next.

Compelling as the work might be, it is undeniable that it has ruffled some feathers online with its cold-hearted approach, with some male viewers commenting that blaming one gender entirely for the plights of the other is simply not rational. In one response video titled ‘Be A Man, They Said’, a monologue similar in style to the poem lists the ways in which men too are pressured by societal norms regarding their appearance – “How tall are you? Say it on your Tinder. Oh, too short. Get muscles. Eat more. Girls like a real man”.

The long-term emotional damage of low self-esteem in men is undoubtedly a topic that is more prominent than ever, with advertisements and products and Instagram influencers promoting this mythical ‘real man’ everywhere we look. The feelings of inadequacy they inspire have more in common with the diet shakes and lip fillers aimed at young women than we tend to acknowledge.

However, ‘Be A Lady, They Said’ is not so much about appearances, but impressions. One factor that critics have tended to gloss over so far is its emphasis on sexual assault/harassment. The words “Don’t drink too much, don’t walk alone, don’t dress like that, don’t get drunk’”, highlight our tendency as a society – even in this post-#MeToo era – to victim-blame and shift responsibility away from ourselves by rationalising that if women behave these ways, what do they expect? Despite the enormous strides made in recent years in the discussion of sexual harassment, these age-old warnings that are still passed down from mother to daughter need to be questioned more. For this generation, the idea of a ‘lady’ is not the docile, wide-eyed sex-kitten described in Rothstein’s work.

It would be an insult to the innovative women of the past, also, if I suggested this was ever the gender’s own ideal either! Coco Chanel designed women’s clothes to be comfortable and practical, not as titillation for ‘the male gaze’. The idea of waiting at home each night with a hot meal ready for a husband would have made Katharine Hepburn cackle. Many great women of the past like them, I believe, would have agreed with Rainville’s poem, and its message for this era of young girls and women searching for an identity – don’t be a lady. Be an individual.