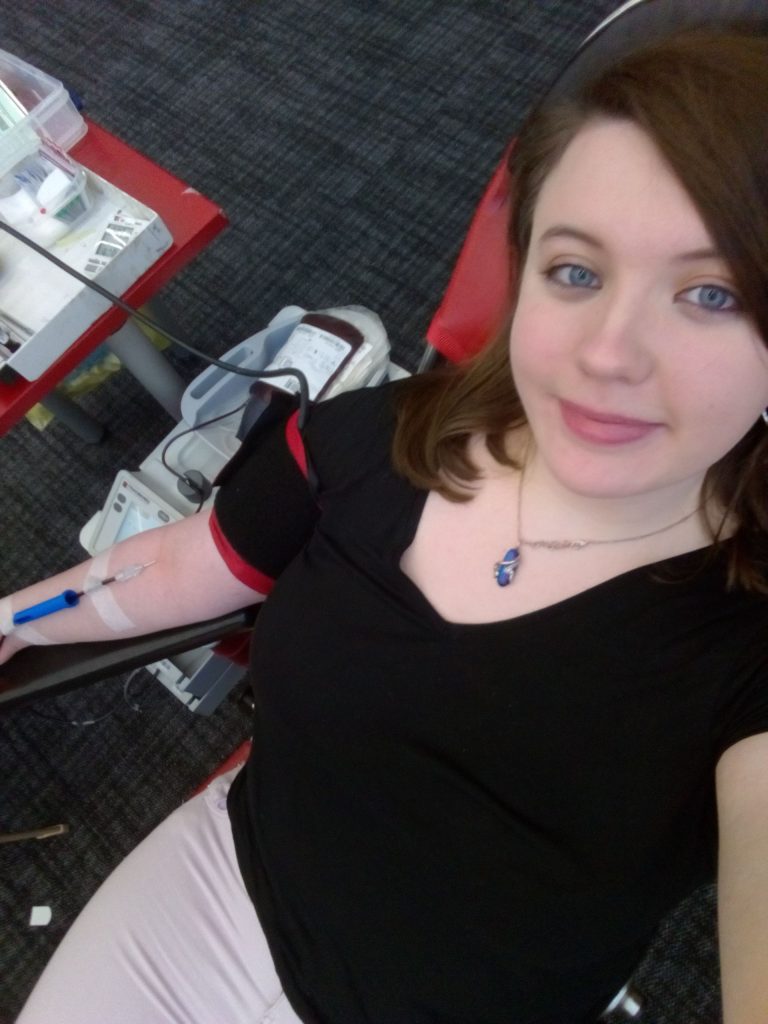 Walking into the Bailey Allen, my stomach was in knots and I wished to be literally anywhere else. This will be a fairly familiar scenario for any NUI Galway veteran, with many of us associating the venue with dreaded exam halls. Last Wednesday, however, I was walking in for a different kind of test altogether. I had decided to face my fear of needles (and blood, and medical questionnaires/ any paperwork deemed adult-ish) to give blood for the first time in my life.

It was a wonderful thing to see the Bailey Allen so crowded for the Blood Donation Drive. The huge turn-out meant that the waiting time was significant, but I welcomed the knowledge that this held off the impending injection for a little longer, and it was all because so many students were giving up their time, and precious blood, to help strangers in need. As we all gathered in our chairs and waited to be registered, we could see people further back in the hall hooked up to their rapidly-filling blood bags. With each newly registered donor, we inched one seat closer to being quizzed by the medical staff and, if successful, being hooked up ourselves. I thought of it as a game of musical chairs, only much more morbid, as the only prize was a massive syringe to the arm.

Getting that syringe into you, however, is more difficult than you might think. First, an extensive interrogation is carried out to ensure that the blood you donate is safe to be used by its intended recipient. Fair warning should be given here – nothing is off limits in their questioning. Sexual history, drug use and former medical procedures are areas of particular concern, and have to be answered thoroughly and honestly on the registration form, and answered again in a private interview with the medical team. Once the questions have been answered satisfactorily, and your blood is deemed safe to be donated, it’s time for said blood to be tested. A prick of the finger produces a drop of blood to determine haemoglobin levels. This small incision is sharp enough, and combined with the sting of the rubbing alcohol, it was more painful than the actual blood donation later on. It was over in seconds though, and I felt strangely proud when the nurse told me I had “excellent” haemoglobin levels. Overall, all of the staff were a huge help on the day. Without their friendly reassurance, I likely would have chickened out.

With everything questioned and answered and approved of, it was time to hop on the bed and do what I had actually come to the hall for; hand over my blood. A friendly nurse made pleasant conversation to distract from what she was doing as she inserted the syringe into my arm. After all that nervous build-up, I experienced no more than a slight pinch before everything began running smoothly. Literally, the blood was smoothly running from my arm into the bag beside me. I had to squeeze a little orange stress ball throughout this part of the procedure as I waited for the bag to fill up. I don’t know why this was necessary, but it was oddly comforting. The nurses promised me that the longest it ever takes to extract the blood is fifteen minutes, and it took less than ten minutes before my own machine started beeping urgently, signalling that enough had been taken. A beaming male nurse removed the needle from my arm and thanked me for my donation. “You’ll get a text in a few weeks’ time to say your blood has been used to help save a life, and that will really drive home the importance of what you’ve done today”, he smiled at me, and I couldn’t help but grin back. Lying on that chair, it was a great feeling to know that just a small pinch and some tedious queuing on my part had possibly helped someone on a hospital bed of their own; someone there under much more tragic circumstances and not by choice, like I was.

Feeling very proud and accomplished, and clutching my new donor card, I was escorted to a make-shift canteen (a few chairs and a table with some snacks on it) while my fellow donors and I refuelled and were monitored to ensure we weren’t too faint to leave the building. I was given a glass of Sprite and lots of praise about how brave I’d been, and it was honestly one of the nicest atmospheres I’ve experienced in a while. I half expected them to whip out some gold star stickers á la primary school. Catch me donating blood at a superhuman rate in future for this constant income of validation. I’m only half-joking, especially because of the added bonus that I can fast-track the queue next time now that I’m no longer a first–time donor.

After going home, the adrenaline rush of the whole ‘overcoming my fear’ thing quickly wore off, and I was hit with a wave of exhaustion. I don’t know if it was the loss of blood or the needless earlier fear on the day that wore me out, but I needed an extensive hibernation period before I regained human function. When I woke up though, my arm felt surprisingly fine and there was no bruising of the injection site. I also had a load of free snacks in my bag that I’d been encouraged to take from the Bailey Allen, so I was on a sugar high and good as new within a few hours. Overall, it was a small sacrifice to make in order to give a stranger a shot at recovery because of my blood. If you’ve ever thought about donating, please consider that you and your loved ones are only ever one sudden tragic accident away from needing that donated blood yourselves. To see if you may be eligible to donate, head to www.giveblood.ie.