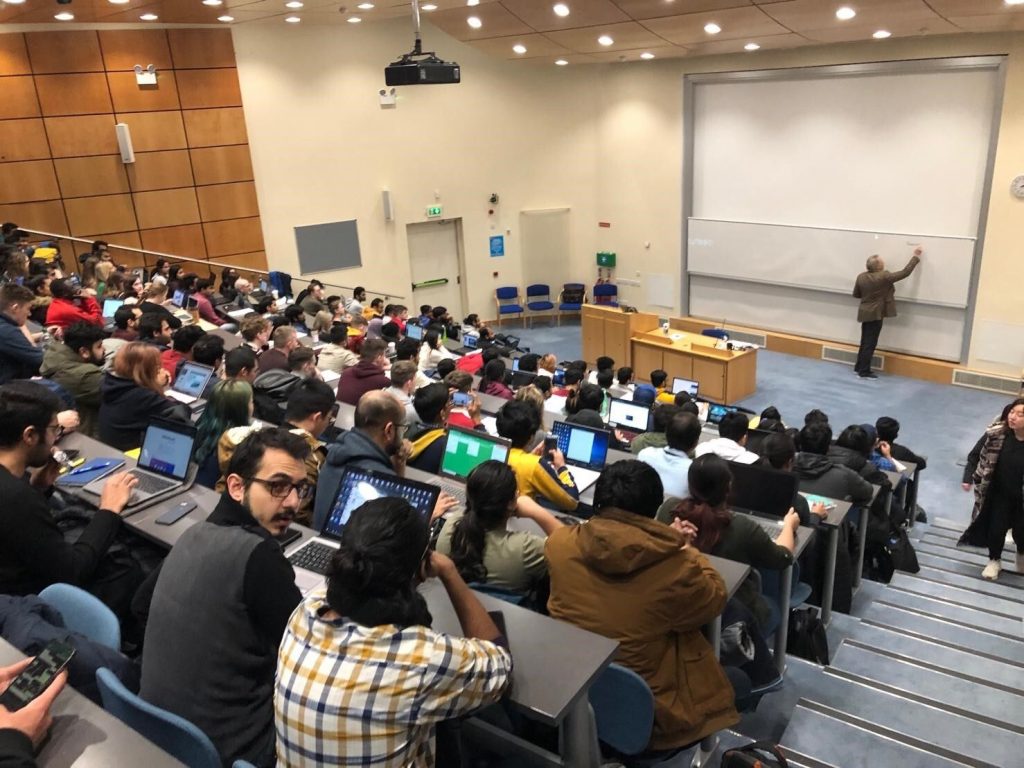 On Tuesday the 25th February, the Masters students in NUI Galway’s Business Analytics were given the incredible opportunity to understand Economics in terms of Data, under the profound mentorship of the “Dean of Big Data” Bill Schmarzo, CIO (Chief Innovation Officer) of Japanese conglomerate Hitachi programme and Director of MSc Business Analytics, Denis Dennehy.

Bill Schmarzo is regarded as one of the top digital transformation influencers on big data and data science. Bill formerly served as CTO of Big Data at Dell EMC & as the VP of Analytics at Yahoo! He is also an Honorary Professor at the School of Business and Economics in NUI Galway.

According to Bill, “Digital transformation is not a technology discussion; it’s an economics conversation”. The whole idea of digital transformation revolves around leveraging digital assets to uncover pristine or existing customer segments and thus creates market value. Bill cited an instance of the “economics of raw oil” to illustrate the value of data, which never depletes and can be reused for endless use cases.

However, oil is no longer the world’s most valuable resource, but data is. By 2020, there will be 5,200 gigabytes of data on every person on the planet. In this modern era of the data-driven economy, what drives monetisation for organisations? Is it the 3, 4, or 7 V’s of Big Data? Not really, rather it’s the “granularity” that facilitates unprecedented comprehensive analysis. Bill jokingly mentioned that it’s not the V’s of Big Data that interest customers, precisely at the business side. Rather, they care about the 4 M’s, a tongue-in-cheek abbreviation of “Make me more money!”.

Cyber-Physical Systems, Internet of Things, Human-Machine Interactions & Artificial Intelligence, are among those technological combinations that can potentially transform the future workplace, while Data Science, Design Thinking, and Economics act as the “missing glue” to bind those. Design thinking humanizes data science. Bill believes that design thinking enables us to examine and create each business case individually, without being biased by prior experience to jump into a generic conclusion.

While addressing the concern of whether Artificial Intelligence will ever replace human intelligence, Bill suggested that AI will force humans to become more human. People who will thrive in the future must learn the ability to empathize with human condition & and the interpretation, articulation, and formulation of the human “ethics equation” will become more significant.

The insightful session was concluded with a workshop letting the students exploit the economic aspect of the digital commodity to power business and operational models. Students in the Masters course got their chance to give their opinions on the changing nature of analytics and the keys to success in the field of data science.

While describing the impact of the session, Ogonna Emesiofor, from MSc of Business Analytics, pointed out that the “Majority among IT employees tend not to understand the idea behind various projects that they are involved in. But taking a design thinking approach to all projects makes you see the bigger picture, and as such, you can better relate and address what the customer wants”.

“Design thinking is a new way of breaking down the business to help them improve”, Mosopefoluwa Ogunkanmi, studying in the same course, told SIN.

According to Balaji Patro, a student in MSc of Information System Management program at the University, “Value engineering process is the secret sauce for successful data science. Business initiative and stakeholders come before architecture and technology in the value engineering framework”.

It was Denis Dennehy’s vision that motivated him to invite Bill as the Honorary Professor at the Business School, MSc of Business Analytics programme. “My motivation to invite Bill was to internationalise the Master’s programme and to bridge the gap between industry and academia for students to realize the importance of developing their creative self just as much as their technical and business self”, Denis stated during an interview.

Finally, such collaboration of industry-academia not only allows the master students to receive a first-hand experience on industry operation, but also bolster their employability.