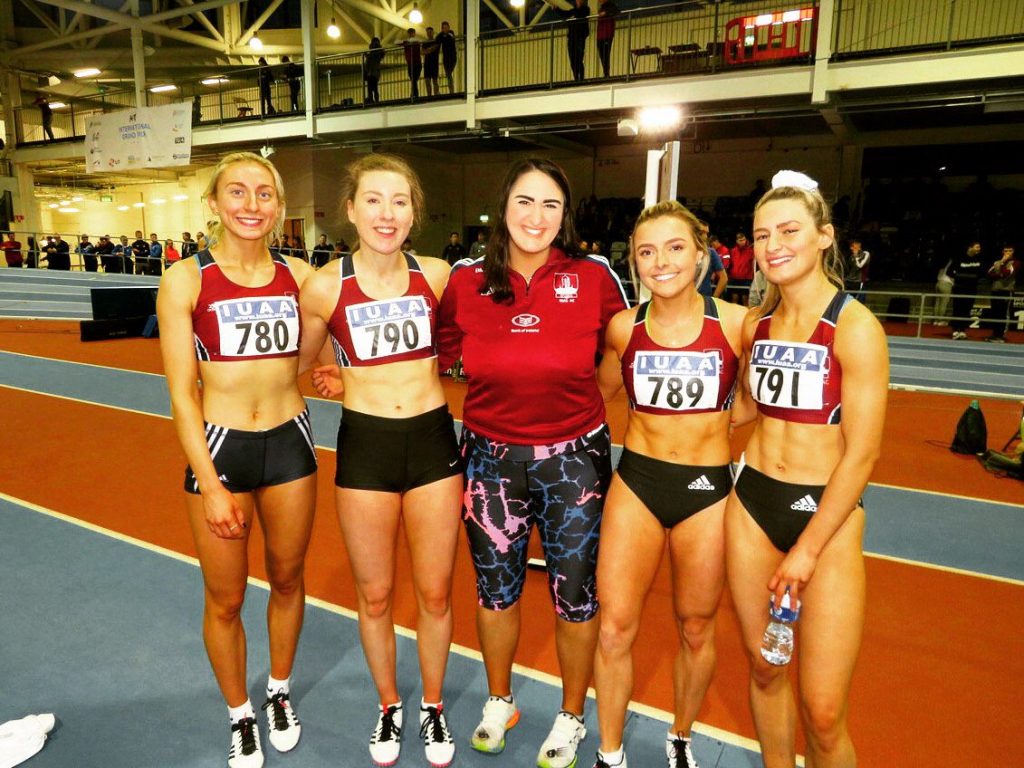 Saturday, the 15th of February, saw athletes from across Ireland migrate to Athlone IT, for the Irish University’s Athletic Association’s (IUAA) Indoor Intervarsity Track and Field competition. This competition proved to be NUIG AC’s most successful intervarsity performance to-date. The men’s squad earned team bronze medals, with the female squad going one better, to claim the 2nd best female intervarsity team in the country.

Not only did the squad shine on an overall basis, a total of 11 individual medals were won, with 9 NUIG records and one IUAA record smashed along the way. Given these great performances, a very ecstatic team Captain, Bridget McDyer exclaimed her delight with the weekend’s showing.

“As captain, I’m so proud of the team. At the beginning of the year, we knew we had something special, especially after our performance at road relays, earning a team medal and both teams finishing in the top 6. I think this championship has showed that we are a serious contender across all disciplines as we work to continue strengthening each one. I’m delighted with the team as a whole and with each individual performance. I am looking forward to cross country in March but especially to outdoors in Dublin in April, where I hope we can once again get the team into the top 3 and build on the dedication of athletes and coaches. A mention as well to the sports unit, who’ve been vital to us as a high-performance club, providing us with the necessary resources and support to achieve at the highest level”.

The level of talent in each event line-up was next to top class, and the races did not disappoint. A standout performance worth mentioning was provided by Pierre Murchan, an NUIG sport’s scholar, who took the men’s 3km title with a vengeance. Taking out an early lead and fast pace, he ensured he shattered the IUAA record in the process. More NUIG records were broken in the men’s 800m, weight for distance (WFD), shot put, 1500m and also in the women’s 60m hurdles, 400m, and WFD. The highly anticipated and hotly competed relays closed the competition in Athlone, with the NUIG ladies storming home to gold and taking the NUIG record with them in tow.

To the outsider, (perhaps due to our social media output), medals and records may seem like nothing new to NUIG AC. This may be true, but these achievements act as just the tip of the iceberg. Our athletes make these results seem easy, almost effortless, as they submerge themselves amongst the best of Ireland’s athletic talent. What goes unnoticed however, is the hours of handwork behind every performance. With every sport, a level of commitment is required to succeed, and our athletes are no different. Evenings are spent in Dangan facing Galway’s gruelling elements. Early alarms are set to hit the gym before college, and numerous nights out are turned down in the face of upcoming competition. It is for this reason that it is pertinent to commend the achievements of all of our athletes, from the record breakers, to those who featured in the heats. They all represent the hardworking, committed ethos that NUIG AC embodies and we look forward to seeing the results of their perseverance over the 2020 season.