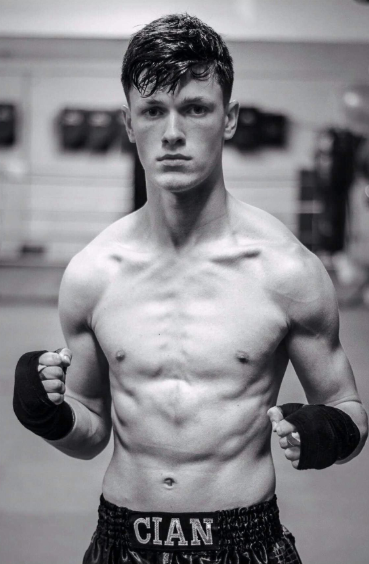 I recently met Kinvara native Cian McCormack from Co. Galway and travelled around with him to explore what a magnificent career he currently enjoys in kickboxing.

The ambition of becoming one of the best fighters in Ireland has become an obsession to Cian McCormack, as it’s been an ambition he’s held throughout his whole life. In his youth, he would wake up in the early hours of the morning and switch on the TV and watch the UFC, mixed martial arts sport, and watching this got him very interested in the sport.

“When I became a teenager, watching a lot of fighting on YouTube, my dad wanted me to get into the sport, (he) never really pushed me as he didn’t want me to push me away [from the sport]”.

“Becoming dedicated to the sport, I went out, got my own punch bag and made a point of it, doing a few sessions for few hours a day, keeping me motivated, mentally strong, while looking out the window and thought of myself representing my own country in a major event at amateur level.”

“Getting to major tournaments would be another thing that will help me challenge more in my career, after joining a local kickboxing club in Galway City, Black Dragon’s Club, with all the hard training, I got chosen to represent Ireland at International level. if we want to go to different countries, the promoter there, who’s flying us over, pays for us, or if we go to a tournament, we have pay for it ourselves”.

“Getting the call to represent Ireland, when, at the time, I didn’t think was possible, as only my father got me to take an interest in the sport”. e describes that he looked to take different aspects of different fighters, “You can only be yourself as a fighter, do it just as well as them and trying to take as much things from each one of them”.

Watching him in the ring with his trainer, going through his different skills that he uses, different exercise drills, and also the discussion of his healthy diet, it’s clear to see how committed he is.  While attending the gym, he goes through various things to assess his strength and weaknesses from every fight he was involved in.

Going for long training sessions throughout the week, meeting and chatting with some of his fans gives him enthusiasm, if he has fights coming up in the long run. At home he has healthy diet, eating plenty of protein in the morning, plenty of wheat, porridge or scrambled egg that will build his strength, then would go out take long  walks to have breather to take a breather and get ready for his next training session ahead of the fight that he is in preparation for.

Cian is getting ready to represent his country at international level, when he takes on Belgian champion Dario De Brabander at the famous Lamiro Fight Club Gym in Brussels, in a fight that will be under Pro K-1 rules. “I haven’t fought within a year so it will be a massive challenge for me to get to the standards that I need to be at to be able turn professional in the future”. He will go down to the gym during the week with his shins and gloves in preparation for the biggest fight of his career and a win for him on the day would be his greatest achievement ever.

At amateur level “[we’re]not even in the Olympic because our sport wasn’t really recognised at an amateur level, we’re relying on people’s sponsorship, so we don’t get sponsored by the sports council”. On getting this fight for Saturday evening, Cian explains that he and his team “get sponsors for the bigger fights so a show like that can happen”.