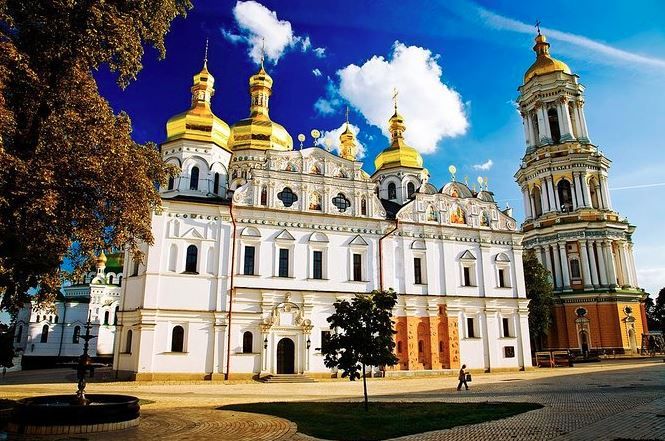 Kyiv is the capital of Ukraine, with a population of almost 3 million people. In October of 2018, Ryanair announced direct flights to Kyiv at an affordable price. Ukraine has seen an increase in tourism thanks to the TV series Chernobyl, and since there are no direct flights to any city near Chernobyl, people use Kyiv as their starting point. However, Kyiv itself has a lot of fantastic tourism sites to explore! Also, keep in mind that Ukraine is not in the European Union, which means that they have their own currency, and many do not speak English. The currency is hryvnia, which is 26.3 for each €1. It is advised that you look around for the best price for currency exchange upon arrival. Do not exchange your money at the airport, as it is not financially beneficial due to the high service charge rate.

This is a historic Christian Orthodox monastery standing since 1051. This site is free to enter and explore but beware of the excessive amounts of golden icons. Gold is a symbol for Ukrainians, not only of wealth, but also of respect. If you look closely, you will see that a lot of older people will have golden teeth and most citizens would be seen wearing golden jewellery. Most churches and monasteries in Ukraine have paintings of holy saints embedded with gold, as well as the building itself. It is a beautiful sightseeing destination if you are a fan of art and architecture.

Maidan Nezalezhnosti is the central square of Kyiv as well as the largest square in the city. This is a very good place to take pictures and sit down for a cheap coffee. From here, you can take a walk and appreciate the layout of the city. Around this square, you will find the singing and dancing water fountains. When it gets dark, the water fountain begins to light up in different colors and shoot up into the sky, playing some internationally loved tunes.

3. The Bohdan and Varvara Khanenko National Museum of Arts

This museum contains one of the largest foreign exhibits in Ukraine. The entry for this place converts to about €2 or €3 and you will not be bored! The estimated time spent at this museum is up to three hours. The museum is not far from the heart of Kyiv and, during the USSR, was ranked third due to its value and size. There are tours available in English at the museum to tell you about the pieces inside. There are also little notes next to the artifacts with a little info about each one. There are student discounts, so bring that student card!

Not going to lie, this one was mainly for the s***s and giggles. This museum is not known for being very large, however, it does contain the world’s largest amounts of toilet–related souvenirs! Entry is around €3, and it is guaranteed to not only inform you, but also entertain you.

Are you a fan of opera or ballet? Then don’t forget to give this place a visit! While in Ireland and in most European countries, ballet and opera are quite expensive, in Ukraine it is affordable enough not only for foreigners, but also for the citizens. Ukrainians love going to shows and it is part of their culture to try and make time to go and watch a play every now and then. If you ever wished to visit the third oldest opera house in Ukraine (established in 1867), your trip to Kyiv would be very beneficial. Tickets cost as little as €10 and you can get the best seats in the house for an additional €10. For the citizens of Ukraine, it would be quite expensive, but luckily the exchange rates are an asset to visitors. Keep in mind you will not be permitted to enter if you are wearing clothes that are overly casual.

This museum is dedicated to Russian and Ukrainian art, which, if you’ve never seen before, will take your breath away! If you were ever curious about the Kozaks and the legends of Ukrainian culture, you must give this place a visit. Entry is like the other museums mentioned in this article (€3–ish in conversion) and student discounts may apply.  This museum is not overly large but is rich in the pieces that it displays.

I hope you found this guide helpful! Keep in mind that there are a lot of churches and monasteries you could visit, all beautiful and rich in history. There are museums all over the city and food is both cheap and delicious! Make sure to check out the Ukrainian traditional menus and dishes like; Borsh, Vareniki, and Piroshki.