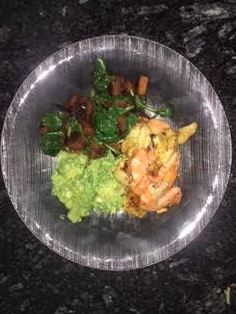 This recipe is for the fish lovers, the sweet potato aficionados, and the guacamole worshippers. It’s for anyone out there who wants all of the above, all at the same time. It’s garlic prawns and paprika sweet potato cubes, served with oodles of guac. I had this meal for four consecutive dinners last week. Think tex-mex bowl meets Spanish holiday.

For this meal, you’ll need: prawns, garlic, butter, lemon, a sweet potato, paprika, an avocado, spring onion and spinach. When it comes to the prawns, you’re going to want to splash out on those of a decent size, as they’re pretty much the main event of the dish. You can get reasonably priced, fresh, raw king prawns in Lidl, or (if you’re scared of the raw stuff) some frozen, cooked ones in Tesco. If you want to skimp on the ingredients, the paprika can be left out. For true, banging flavour, however, it’s a must. To save some dollars on your avocados, try going into Tesco at the end of the day and picking up the ones at a reduced price. These are perfectly ripe, yet the poor Tesco folk believe them to be gone/going off. Nobody, tell them. It’s better for all of us this way.

As you might have guessed, there are three parts to this meal: the prawns, the potato, and the guac. The best part is you can prepare all three aspects pretty much at the same time. Start by chopping up your sweet potato into small cubes. The smaller the cube, the quicker the cooking time. Depending on the size of the potato, I find about a third per person works. They don’t have to be perfect cubes either. The more rustic, the better. Throw these chunks onto a baking tray and drizzle a little bit of whatever oil you have over them. Now dust in paprika. The best way to mix everything in is to do so with your hands, making sure the cubes are evenly coated. We don’t want to leave any little cube out. Now place in the oven at about 180 degrees for fifteen minutes, or until they’re soft to bite into and crisp on the outside. Avoid adding too much oil, as by doing so you’ll prevent a real crunch from forming on the edges.

Meanwhile, chop up a spring onion or two and couple wedges of lemon. Mash your avocado in a bowl (I use a whole one) and add the chopped onion, plenty of lemon juice, and salt. Season according to taste. If you like heat and have chilli flakes on hand, feel free to fire in a few. As for the prawns, the way you prepare them will depend on whether they’re frozen or not, and precooked or not. For all frozen prawns, I like to defrost them quickly by placing them in a bowl of boiling water. After a couple of mins, drain and repeat. If they’re uncooked, add to a pan on high heat with some chopped garlic, butter, and a drizzle of oil. The oil will stop the butter from burning. Once the prawns have turned pink on all sides and are opaque, they’re ready to go. For precooked prawns, you simply want to heat them in the garlic butter mix. Either way, make sure to heat thoroughly.

Once all three segments of the dish are ready, simply plate up together on a bed of spinach. Drizzle the garlic butter from the pan over the top. There you have it, a difficult-to-name but very delicious bowl of goodness.