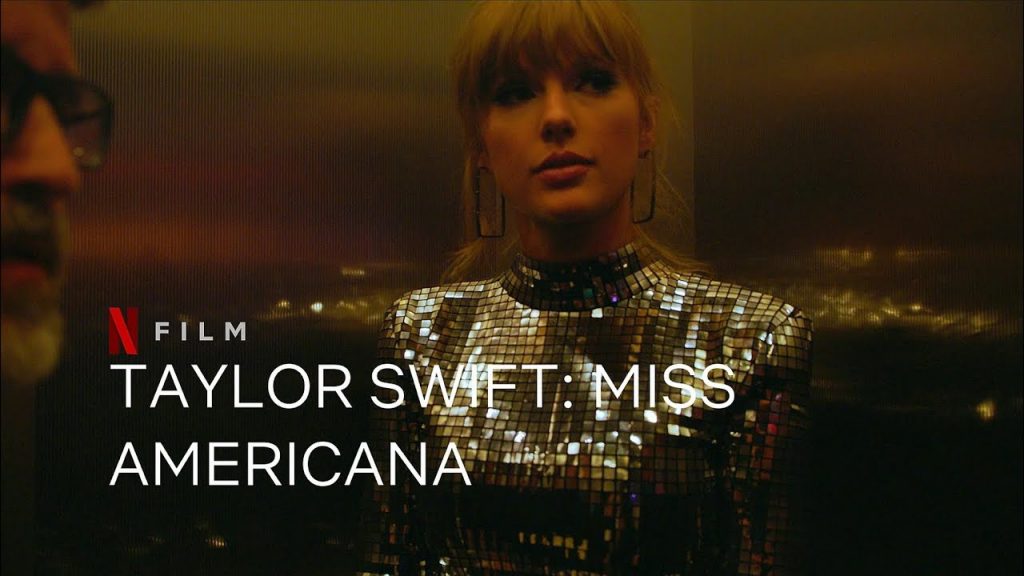 The first in a number of high-profile pop–star documentaries set to be released this year is Miss Americana, directed by Lana Wilson, with ten-time Grammy award winner Taylor Swift as the focus. Miss Americana delves deeper into some of the topics Swift has started to become more vocal about in more recent years, but also sees her open up (but not totally) on a variety of new topics.

The documentary follows Swift as she navigates her way between the end of one album-era, Reputation and the beginning of another, last year’s Lover. We witness her at different points of her life, roughly over a year.

One of the most eye-opening moments for me, someone far removed from inside the pop universe is when, despite the adoration of millions, a huge team behind her and a host of celebrity friends, Swift candidly admits feeling lonely and not having anyone to ‘share’ her success with. We can only guess that maybe the issue is that there’s not really anyone who can understand what it is to be Taylor Swift: to have that level of success, from such a young age, in front of the whole world.

Wilson takes viewers into the studio to witness the production of three different tracks and getting to see one of the biggest artists of our time working on her craft feels like a privilege. However, the main focus of this documentary is not exclusively music. Here we watch a young woman, at the height of her career, in the glare of the world’s media, come to terms with how to use her platform on important issues.

Swift’s silence on who she would be voting for in the 2016 U.S. election was nothing short of deafening and one of the most interesting moments in the documentary was when she confronts her team over going public as a Democrat. Swift makes the decision to support a Democratic candidate in the 2018 Midterm Election vote, regardless of how it will affect sales, despite being warned profusely not to do so by her management.

Another fascinating moment was when she pointed out the need for female musicians to reinvent themselves with almost every album, with the same pressure not applied, or at least not as fervently, to men in the industry. This was something that has resonated with viewers online, with Swift voicing just another facet of the high levels of sexism that still operate in the music industry.

Another moment that stood out was when Swift received a call telling her that ‘Reputation’ had not received any Grammy nominations for the ‘big’ categories of Album, Record or Song of the Year. Upon hearing the news, a defiant Swift says, ‘it’s fine, I just need to make a better record’.

It is clear that unlike many of her contemporaries, Swift still holds the opinion of the Recording Academy in very high regard and that she still seeks to make music to impress the Academy is disappointing for fans. However, shortly after the release of this documentary, the 62nd Annual Grammy Awards were held, with Swift notably absent from the crowd, seemingly snubbing the Academy after ‘Lover’ also failed to pick up any major nominations – so, maybe she has finally learned to let go of the idea that it’s the Grammy’s and not her or her fans, who get to decide on whether or not she has made a good album (Perhaps this will signal a new sound for TS8?).

Despite these and more moments of interest – which include a searingly honest admission about an eating disorder and how the family have been coping with her mother’s cancer diagnosis, it fails to function as a true documentary.

It is too stage managed and it’s questionable whether Wilson had total creative control or not. Although the topics discussed were of interest, it at times flowed like a box-ticking exercise. It would have worked better had Wilson pushed Swift harder on some of the more controversial topics, such as the Kim Kardashian/Kanye West snapchat incident.

After years of being ‘a good girl’ in the public eye, Swift is learning to undo the effects of that damaging title and be a little less guarded nowadays, but it felt like she still knew the cameras were on at all times and it would have been interesting to see a completely unguarded Swift probed more on some harder questions.